The Chemistry of Cake Ingredients

Prev NEXT
The batter for a chocolate cake swirls in a mixing bowl. Every ingredient -- as well as the mixing method -- contributes to the taste and texture of a cake. Babina Wisnevson/EyeEm/Getty Images

A standard cake recipe typically includes flour, a type of sweetener, eggs, some kind of fat, a liquid, a leavening agent to help it rise and flavoring (like vanilla, cocoa powder or cinnamon) [source: What's Cooking America]. The ingredients interact with each other to produce cakes of varying density, texture and taste. Think of cake-making as a truly tasty science experiment. Here's how each ingredient works:

Leavening agents were the main instigators of cakes becoming their own category (separate from breads), as these allowed baked goods to literally expand in ways they never had before. Chemical leavening agents release carbon dioxide gases within the cake mixture during the baking process, helping the batter to rise into a porous structure. Examples of chemical leaveners include baking powder, baking soda and cream of tartar. Yeast is a natural leavening agent that works in a similar manner to the chemical ones. One unsung leavening agent is air. Beating eggs, creaming the butter and sugar and sifting the flour all add air to your batter. That's why it's so important to follow your recipe carefully. The mixing steps and the type of leavener listed are all there for a reason[sources: Encyclopaedia Britannica, King Arthur Flour].

A fat source is usually included to improve texture, moistness and overall flavor. Butter is the perennial favorite, because of its knack for trapping air when creaming, helping to make baked goods lighter and more flavorful. However, shortening, margarine and cooking oil can be used in tandem with, or instead of, butter [sources: Huff, Baking Industry Research Trust].

Sweeteners are very important to cakes. Although alternatives, like honey or artificial sweeteners, are usable, plain old sugar bonds best with water molecules, helping to make cakes moist and soft. Too much or too little sugar can tip the scales, however, causing the cake to be too tender or too tough, respectively. Sugar also deepens a cake's color and flavor [source: Masibay].

Eggs play a big role, since their inherent proteins work with other ingredients to form the structure of the cake. The emulsifiers in the yolks also help to mix ingredients that normally don't want to stay together, like water and oil. Those same proteins, when heated during baking, help the cake to achieve a nice, golden-brown hue. Eggs yolks and the fats they contain also up the flavor quotient of any cake [source: Field].

Flour gives the cake its strength and holds all the ingredients together, thanks to its proteins that mix with water to form gluten. The gluten stretches to contain the leavening gases when the cake is rising in the oven. The higher the protein content in the flour, the stronger the dough. Cake flour is 7.5 percent protein while all-purpose flour is 10.5 percent (bread flour is 12 percent). So, cake flour will make your cakes softer, although you can use all-purpose flour — just use a little less [source: Lauterbach].

Liquids hydrate the protein, starch and leavening agents, allowing the chemical changes needed to develop the structure of the cake. Liquid vaporizes during the baking process, creating steam which expands the air cells and the volume of the cake. Liquids also help make the cake moist and improve its overall texture [source: Lauterbach]. 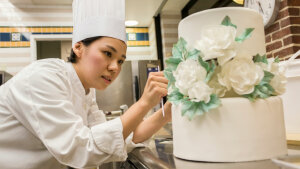 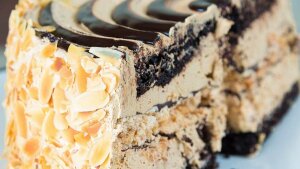