by Cherise Threewitt
Prev NEXT
8 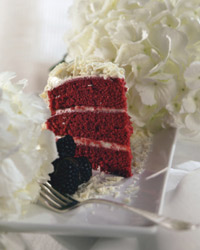 The first red velvet cakes were a result of better living through chemistry: When buttermilk and baking soda meet, they cause a reaction that results in a reddish tinge. The first known published recipe is dated 1962; before artificial dyes and digital editing tweaked our visual expectations, the offbeat but natural hue was enough to spark imagination.

Now, most chefs enhance the color's saturation to satisfy the masses. Purists prefer a version tinted with beets. When that doesn't cut it, food coloring is enlisted to make the red tint more crimson. Unfortunately, tricky bakers sometimes use the unnatural color to overwhelm your senses and disguise a bland cake.

For all the chatter about red velvet cake's color, little is said of the flavor. It should be rich with a subtle kiss of cocoa (though the actual chocolate content varies wildly in recipes), and it's traditionally topped and layered with white or cream cheese frosting to emphasize its most striking feature and contrast with the chocolate notes.

Nothing adds to a food's appeal like a good mystery; once the color was explained, the question of red velvet cake's origin remained. It's reputed to be Southern in origin (supported by its prominence on the rosters of Southern restaurants and bakeries all over the country), though foodie urban myths abound that give credit to New York's Waldorf Astoria Hotel.