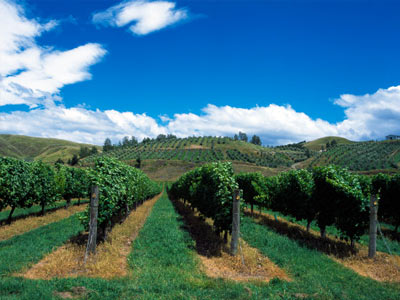 The Bay of Plenty in New Zealand is known for its many wineries and restaurants. See our collection of wine pictures.­
Vicki Couchman/Axiom Photographic Agency/­Getty Images

­The "Bay of Plenty" could be a reference to your Thanksgiving spread -- or the expanding waistlin­e caused by it. But it's actually a region on the North Island of New Zealand known for its abundance of wineries and restaurants. Legend has it that the area got its name from Captain Cook, who explored the area in 1769. He noticed the giving nature and prosperity of the native group, the Maori, and decided the area would be well suited to the name "Bay of Plenty."

The Bay of Plenty region is traditionally mentioned in the same breath as the adjoining Waikato region -- you'll notice that both regions are mentioned later in this article. Both areas are south and southeast of Auckland. Auckland is a well-known wine-producing region, but the Bay of Plenty fares well with its small but robust collection of wineries.

­Bay of Plenty has a lot going on beyond wine. Its beaches attract surfers year-round, and the gorgeous scenery alone is­ enough to draw people in. The area is also home to several spas and relaxation rooms, and every season seems to have a different adventure specialty, which, in turn, greatly benefits the wine business. The tourism industry and the wine industry really feed off each other.

Click to the next page to discover the interesting historical and cultural points of the Bay of Plenty wine region.

If you travel around the Bay of Plenty area, you'll be able to enjoy its wine history at the same time as its general history. The main wineries are located just south of Thames and speckled along the Tauranga Harbor. In New Zealand's ­gold-digging past, the Thames was the place to be for mining. You can explore the past as you sip a glass of wine.

As far as vine history, there is evidence that the first grapevines in the Waikato and Bay of Plenty area were planted in 1903 in the area known as Te Kauwhata. Romeo Bragato, an Italian who migrated to the area to use his viniculture skills on the land, is said to have settled here because the landscape reminded him a little of Italy. Te Kauwhata is still recognized and celebrated as a special place in the country's grapevine history.

The Bay of Plenty area has taken steps to make sure that wine and wine culture are integrated into the lifestyle of the region. So they celebrate wine here with festivals and wine challenges. Mid-March marks the annual Tauranga Boutique Wine and Food Festival, where there are opportunities to sample wine varieties with a smorgasbord of food. New Zealand, specifically the North Island and Bay of Plenty region, participates in the Great Down Under Wine Challenge, unfortunately losing to Australia in the sixth annual event in August 2008 [source: Bay of Plenty New Zealand].

Read the next page to learn about how agriculture has shaped the Bay of Plenty wine region.

The Bay of Plenty and Waikato regions are quite spread out in distance, which might discourage some travelers who might normally seek a wine trail in order to explore the various wineries in the area. The nice thing about the area is that when there are no wineries to take up your time, there are also other attractions like surfing, beaches and great restaurants.

Though the Bay of Plenty and Waikato are often lumped together for easy division of land regions, their climates differ slightly. Waikato isn't as close to the water and tends to be pastureland and agriculture-heavy. Waikato experiences a lot of rain, and so isn't really in the best position to grow grapes. Wine grapes like to be a little more dry and sun-drenched than what the Waikato region can provide. Bay of Plenty is on the coast and does grow vine plants well, but grapes aren't on the top of the list. Kiwi fruit dominates the region's agriculture [source: Kiwi Wineries].

Given the soil and climate conditions, it may seem like Bay of Plenty and Waikato have no business trying to grow grapes for the ultimate purpose of wine. But you'd be wrong to think that. The soil is rather warm because of the weather, and the clay subsoils provide a good base for wine grapes [source: Four Corners].

Click to the last page to learn about the world-renowned wines of the Bay of Plenty wine region.

Famous Wines of Bay of Plenty

The Bay of Plenty and Waikato regions are best known for three particular wines. This specialization in only a few wine varieties makes sense for an area that doesn't have the largest production capabilities. Those three wines, in order of importance, are Chardonnay, Cabernet Sauvignon and Sauvignon Blanc. Although the regions focus most of their attention on only three wines, each winery puts a different spin on the varieties. The diversity in flavors and characteristics really gives the consumer a unique view into the character of Chardonnay, Cabernet Sauvignon and Sauvignon Blanc.

The New Zealand Chardonnay known around the world is complex and fruit-driven. The Bay of Plenty's product is no different. The Cabernet Sauvignon is the most popular red grape grown in vineyards in the Waikato region. The Sauvignon Blanc from the Bay of Plenty region is different than the South Island's -- it's known for its richer flavors. There's a tendency to notice the melon, nectarine and other similar fruit undertones [source: New Zealand Trade and Enterprise].

Though Bay of Plenty hones its skills on the big three mentioned above, you shouldn't overlook the region if you're considering other varieties. Just because the area isn't particularly known for other wines, it doesn't mean you can't find them. In the Bay of Plenty area, it's a good idea to be on the lookout for examples of blends of Merlot and Cabernet, Botrytised Riesling and Méthode Champenoise [source: New Zealand's Information Network].

Now you have a head start for further exploration of the Bay of Plenty wine region. Take these bits of information along with you so you can impress all your friends. Go ahead and pat yourself on the back for being a little worldlier now, but please enjoy kiwis and wine responsibly. Cheers!

A winery in the Waikato region asked people to submit their ideas for renaming a special blend of Chardonnay and Gewurztraminer, and they settled on “Charminer.” The Charminer blend is a good example of the distinct flavors that make the Bay of Plenty region stand out. The Charminer’s Chardonnay notes are more aromatic and crisp than traditional Chardonnay, which has a tendency to be on the dry side, and the Gewurztraminer flavor takes more of a front seat than usual. [source: CN Wine News].­