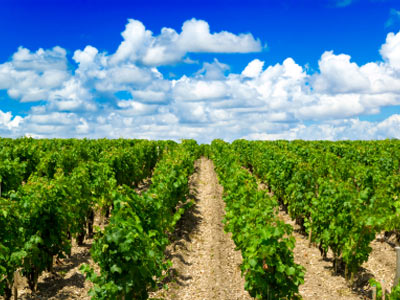 Bordeaux is one of the most important wine regions in France -- and the world. See our collection of wine pictures.
©­iStockphoto/raphael daniaud

Bordeaux -- to most people, the name itself simply stands for a type of wine. However, it's also a prominent French wine region. And, while you might think the region focuses on producing its namesake only, the wine production of the region is actually quite diverse. In fact, wineries within the Bordeaux region are capable of cultivating almost every variety of French wine in existence. This ability, along with the prominent commerce provided by the region's port and a nearly unparalleled history of winemaking, has made the Bordeaux wine region the force it is today.

Bordeaux's history is as rich and layered as you would expect from an old European area. From the times of prosperity -- such as the spread of Bordeaux wines during English rule -- to the trying times -- like the parade of diseases that struck after the 18th century -- viticulture has steadfastly stuck to the forefront as a source of revenue within the region's economy [source: the Wine Doctor].

­Many geographical and agricultural factors brought about Bordeaux's dominant stance in French wine production. And most of them still play a part in Bordeaux's continued relevance in viticulture. The region contains several different areas that allow for diverse grape crops. Furthermore, the entire region has a climate tempered by the ocean. This allows the vines to grow year after year without the need for replanting. Other regions aren't as lucky -- when frost damage happens, crops must be replanted [source: the French Wine Guide]. Bordeaux's port also played a big part in the region's ability to make a name for itself outside its borders.

Much like the regions of Burgundy and Mosel, the history of winemaking in Bordeaux goes all the way back to the Roman Empire [source: the Wine Doctor]. Vines are mentioned in the poetry of the area from the 4th century, and although there is little information to support it, most believe grapes were cultivated here much earlier. The area is ideal for grape growth and there are wine presses that date back to the Roman Empire as well.

There is little information about viticulture in the area before the 12th century, but from then on, wine production has been what the region is best known for. This boom came as the result of a marriage. The union of Henry II to Eleanor of Aquitaine left the region under English rule. As a result, England hoped to encourage trade with the area and offered a tax break to French merchants. Bordeaux's wines became the least expensive wines in England, and were quickly in high demand [source: the Wine Doctor].

Eventually trade relations with areas like Germany and the British Isles improved, farther extending the reach of Bordeaux's reputation. Soon bigger names in winemaking set up shop in the Bordeaux region so they could secure a piece of the thriving market for themselves [source: the Wine Doctor]. The Bordeaux region literally became one of the most important winemaking regions in the world. Despite struggling with major agricultural problems like powdery mildew and other vine-threatening diseases, Bordeaux remains one of the most important wine regions in France -- and the world.

Wine is No Monk-ey Business in Bordeaux

Nearly every wine region of France owes it roots to the monasteries -- but not so in Bordeaux. It might be the only region in France where merchants, not monks, created the area's wine [source: The French Wine Guide].

As mentioned earlier, the region of Bordeaux is fortunate to have a remarkably temperate climate -- this is thanks in large part to the Atlantic Ocean. The winters of the region are very mild and have only occasionally reached temperatures that seriously damaged the vines, meaning crops seldom require replanting. With the singular exception of heavy rain and thunderstorms throughout September, spring and fall are often mild as well. Summers in the region, however, have been increasingly hot.

According to a set of detailed climate and agricultural records, which France has been keeping for hundreds of years, the increased heat has made the harvest happen earlier and earlier, with the 2003 crop having the earliest harvest in history [source: the Wine Doctor].

The soil composition of the overall region varies, but generally, the land of Bordeaux includes a variety of combinations of clay, limestone, gravel and sand. The region itself is broken down into six terroirs (broadly, a terroir is a microclimate or area denoted by its soil type, topography and weather conditions, all of which work together to affect the flavor of the wine produced in that area). The terroirs of Bordeax are:

Reportedly, there are more than 13,000 wine growers in Bordeaux and approximately 9,000 wine-producing châteaus bottling wines. What is grown on these vineyards could be a combination of many grape varieties. Merlot and Cabernet Sauvignon are the most commonly harvested grapes in Bordeaux. Beyond these two prominent varieties, you'll also find Cabernet Franc, Malbec, Carmenère, Petit Verdot, Sémillon, Colombard, Merlot Blanc, Muscadelle and many others [source: the Wine Doctor].

An ideal climate and prime agricultural conditions aren't the only things that made Bordeaux a world leader in wine production. Its port has been equally important, making it possible for Bordeaux-region wines to reach the rest of Europe, bringing general prosperity to the region and allowing wine makers to hone their craft [source: the Wine Doctor].

So sure, there's the Bordeaux of Bordeaux, but what else does the region produce? Chateaus throughout Bordeaux produce hundreds of unique wines, both red and white. From the blend of red wines known simply as Bordeaux to the powerful whites of the region like Barsac, numerous varieties of wine call Bordeaux home.

The Bordeaux is clearly the most well known of the region, named after the area's largest city. And unlike some other French regionals that are made 100 percent from one variety of grape, Bordeaux is actually a blend of at least two varieties of red grapes. It starts with a Cabernet Sauvignon and then might include Cabernet Franc, Merlot or another similar red [source: Wine Intro].

Médoc, a full-bodied red wine, usually contains a blend of Cabernet Sauvignon and Merlot along with a smaller proportion of other varieties, including Malbec and Petit Verdot. [source: French Wine Guide].

Margaux, much like Médoc, is made from Cabernet Sauvignon and Merlot - but the blend relies more on the Cabernet Sauvignon. A small portion of Cabernet Franc and Petit Verdot grapes may accompany this blend, but usually in very small proportions. Some say these are the most delicate wines of the entire Bordeaux Region.

Saint Emilion, a full bodied, strongly hued red wine, is known for reaching maturity quicker than other red Bordeaus. It is typically made of Merlot and Cabernet Franc grapes, which grow very well in this terrior, especially in the Dordogne Valley [source: French Wine Guide].

Barsac wines are powerful and sweet white wines with a strong fruity flavor. Typically, they are made from Sauvignon, Sémillon and Muscadelle grapes, which are known for masking the taste of the alcohol in the wine.

To learn more about wine, check out the links on the next page.

Perhaps it is because the wine named after the region is a famous blend of red wines. Maybe it's the sheer number of red wines from the Bordeaux wine region. Whatever it is, many people think a white wine can't be a Bordeaux. And even some of those who know you can have a white Bordeaux, think the whites of the region are inferior. But this just isn't so; many wine enthusiasts disagree, claiming that those who overlook the white wines are doing themselves a great disservice [source: The Wine News].