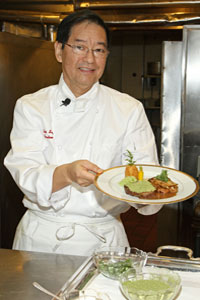 ­So now that you know what jobs await you, it's time to go to school -- culinary school. This is a great option if you­ want to become a chef and you have the time and money required to make it happen. There are three different types of culinary schools -- vocational, two-year and four-year schools. Some cooking schools offer certifications; others offer college degrees.

The plus of a vocational school program is that it typically lasts less than a year and involves a great deal of hands-on experience. At the end of the program you'll get a certificate you can tout when trying to get an entry-level kitchen job. The downside is that there's a lot of information crammed into the classes, and cooking theory is largely abandoned in favor of technique training.

Culinary-only institutions like the renowned Culinary Institute of America (CIA) are another way to go. At the CIA, you'll get one of the best culinary educations in the world. You'll have plenty of hands-on experience, with over 1,300 kitchen hours completed by graduation. The curriculum for two- and four-year culinary school varies, but you can count on classroom work, including:

When you graduate from culinary school, you'll have a bachelor's or associate's degree under your belt and a network of connections. This won't guarantee you a job but it's a good thing to have in your favor. Getting a job is your responsibility and even with a degree from the CIA, you'll probably have to start near the bottom and work your way up.

Tuition varies and like with anything, you get what you pay for. The CIA is the most famous culinary school in the world, and that distinction costs some serious cash -- about $11,000 per semester for the eight-semester program [source: Culinary Institute of America]. Lesser-known schools cost less, though, and you can still get a great education. You can explore your options for culinary schools in your area at culinaryed.com.