Browse the article Ultimate Guide to the Latium Wine Region 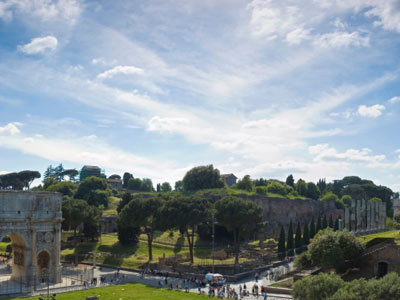 Wine grapes have been grown in the Latium area since the days of the Roman Empire. Today, Latium vineyards produce more than 200 varieties of grapes. See our collection of wine pictures.
iStockphoto.com/fotoVoyager

Exquisite marble. Soaring umbrella pine trees. Priceless paintings and sculptur­es by Bernini, Michelangelo, Raphael. Ghostly ruins rising from the Palatine and Capitoline hills. Gypsies. Pickpockets. Street vendors. Renaissance cathedrals. Gelato in every flavor you can imagine -- and then some. Tourists crowding the Spanish Steps and jostling before the Tre­vi Fountain. Businessmen on Ve­spa scooters. Hordes of pedestrians thronging the streets, ignoring the honking of tour buses and exasperated locals.

No one who has visited Rome can doubt the aptness of its nickname, the Eternal City. And no one who has spent an afternoon sipping wine and people-watching in a sidewalk trattoria will ever forget it. Few destinations are as culturally rich or awe-inspiring.

­Rome is the heart of the Italian region of Latiu­m. For centuries, the area has been a crossroads of cultures -- a center of trade, political power, religion, art and agriculture. It's also a crossroads of geological faults [source: BBC]. Beneath all that lively culture is potentially violent volcanic activity of the sort that destroyed ancient Pompeii. But for that very reason, Latium produces wonderful, distinctive grapes and wines.

Rome, as the saying goes, was not built in a day. Nearly 3,000 years of civilization have gone into the viniculture of the Eternal City, which is recognized as one of the world's foremost wine producers. This article examines some of Latium's finest wines. But first, we need a strong foundation. We'll look at the history of Latium and the various influences -- both sociopolitical and geological -- that have shaped its wine production.

Legend has it that Rome was founded in 771 B.C. by the twin brothers Romulus and Remus [source­: Hooper]. But they arrived at the party pretty late. As early as the 19th century B.C., people lived and farmed in the region now called Latium.

As in much of Italy, the first inhabitants of Latium were Etruscans. Though they were responsible for the first settlements, the region gets its name from another local Italic tribe, the Latins [source: Wine Country].

By the third century B.C., the city called Rome had come to dominate the area - because of civil engineering as much as military might. The Romans built massive aqueducts and sturdy stone roads, some of which survive today. Under the Romans, farming improved and trade expanded, with goods coming from distant regions of Europe, Africa and the Middle East [source: Wine Country]. The metropolis flourished, gradually becoming the seat of an empire.

Of course, we know how that story ends. Invading barbarian tribes from the north -- the Vandals, Visigoths and Lombards -- eventually brought the empire to its knees.

When the Roman Empire fell, much of Rome's splendid civil order collapsed with it. Diseases like malaria spread, as did poverty. Fertile farmlands turned into marshy breeding grounds for mosquitoes.

The central government of the Catholic Church remained in Rome, and most of Latium was part of the papal state. But other forms of government collapsed. Surrounding towns were under the control of local feudal lords or, occasionally, communal rule [source: Wine Country].

In the Renaissance, the pope's court at Rome became one of the centers of the newly flourishing Italian arts. The Church amassed artistic treasures from across Europe and commissioned the works of art and architecture -- St. Peter's Basilica, the Sistine Chapel, Bernini's fountains -- that continue to define Roman art and culture.

When Italy unified in the 1870s, Rome became its new capital. The Pontine marshes were drained, and the ancient farmlands became fertile once more.

What did Roman farmers cultivate on their new land? Read on.

According to myth, Romulus and Remus weren’t just any twins -- they were the sons of Mars, the war god, and a human mother. When the shamed woman abandoned the babies, a she-wolf rescued them and nursed them [source: Hooper]. Today, you’ll still see statues and images of the twins and the wolf throughout Italy.­

Wine grapes have been grown in the Latium area since the days of the Roman Empire, when poets such as Horace sang the praises of wine [source: Wine Country]. The region is sunny and temperate, but not uniform -- drier and warmer on the coast, and cooler and wetter inland. Latium vineyards now produce more than 200 varieties of grapes [source: Wein Plus].

Reds tend to flourish at lower elevations, so those grapes thrive in the drained marshland. But things get very interesting away from the low plains, along the gentle slopes of the hills and mountains in the area.

Much of the soil in the Latium region is volcanic [source: Info Roma]. Volcanoes stud the west coast of Italy. A fault line runs the length of the country, and -- as if that weren't enough -- another one crosses the country from east to west, hitting the west coast just south of Rome and north of Naples [source: BBC]. That makes for a great deal of geological activity in central Italy.

The Colli Albani is the largest volcano in Latium. Although it hasn't actually erupted for more than two millennia, it isn't believed to be extinct. In an 11-month period in the late 1980s, the area experienced a seismic swarm - more than 3,000 earthquakes [source: Seach].

All that volcanic activity might be bad news for locals, but it's good news for local wine. Volcanic rock is porous, and it tends to drain well at the surface but store water at lower depths [source: Cox]. Volcanic soil is fertile, full of potassium salts and phosphorus, nutrients on which grapevines thrive [sources: Compost for Soils, Wine Country].

Volcanic soil is especially suited to produce the white wines for which Latium is known. The high potassium ensures that the grapes have good acidity. As you may notice with wines from some Napa Valley terroirs -- many of which also have volcanic soil -- the soil has a high mineral content, which is reflected in the minerality of the wine.

Which whites and reds are worth a sip? On the next page, we'll take a look at some of Latium's DOC wines.

Other Crops of Latium

Of Latium's 25­ DOC wines, 20 are white. Traditional Latium wines are dry and crisp [source: Italian Made]. They complement the region's justly famous cuisine, which relies on natural flavors, seafood, pork and relatively simple preparations of vegetables [sources: Wein Plus, Winebow].

The best known wines of Latium are, without a doubt, Frascati and Est! Est!! Est!!! Both are whites.

Frascati dates back at least to the Renaissance [source: Wein Plus]. It's best known in its secco (dry) version, which blends Malvasia and Trebbiano grapes for a subtle flavor. A sweet version, called dolce or cannellino, results from high humidity and a vine condition called noble rot [source: Vintage Direct]. That's a nice name for the Botrytis fungus, which produces moldy-looking grapes with high sugar content [source: Novus Vinum]. Frascati is also available in amabile (semisweet) and spumante (sparkling) versions [source: Wein Plus].

Est! Est!! Est!!! got its name from a 12th-century German bishop, Johannes Fugger, who was traveling to visit the pope. As the story goes, the bishop sent a servant ahead to find an inn, and the servant chalked "Est" ("This is it") on the doors of suitable places. At an inn in Montefiascone, the servant was so impressed with the wine that he wrote "Est! Est!! Est!!!" The innkeeper, amused, kept the name, and the bishop wound up moving to Montefiascone [sources: Info Roma, Wein Plus, Vintage Direct].

The wine that made such an impression was probably a sweet Moscato. Today, Est! Est!! Est!!! blends Procanico (Trebbiano Toscano), Malvasia Bianca Toscana and Rossetto (Trebbiano Giallo). It comes in secco, abboccato (off-dry), amabile and spumante versions [source: Wein Plus].

High concentrations (90 percent to 100 percent) of the rare red Cesanese grapes give the Cesanese di Affile DOC its distinctive bouquet [source: Wein Plus]. The remaining 10 percent of the grapes are also Italian varietals -- Montepulciano, Sangiovese, Barbera or, surprisingly, the white Trebbiano Toscano or Bombino Bianco. Secco, amabile and dolce are popular, but you'd be well advised to try frizzante or spumante for the unusual experience of sparkling red wine [source: Wein Plus].

The Eternal City has a wine for everyone. Sample widely. Better yet, take a trip to Rome and drink the wines in context, amid the ancient hills and the pulsing modern life.

You don’t have to stick with DOCs to find an interesting wine from Latium. Thanks to new crosses between local reds and French varietals, Latium’s red table wines are also beginning to draw some interest [sources: Vintage Direct, Winebow]. Try a Cabernet Sauvignon or Merlot.­