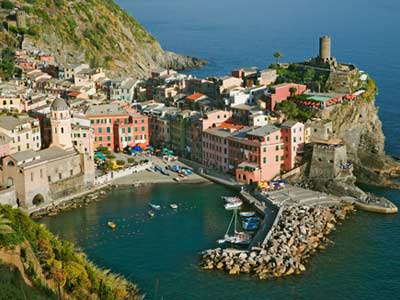 The Liguria wine region has some of the most glorious landscapes in all of Italy.­ See our collection of wine pictures.
Dennis Flaherty/Digital Vision/Getty Images

­If you're planning a trip to Italy, Liguria might not be the first destination on your list. Tuscany is next door, with the art and shopping of Florence and the­ historic sweep of Siena. B­ut don't overlook the sights and the flavors of this small region, framed by steep mountains and warm seas, with a culture all its own.

To start with, there's Genoa's annual wine fair, held every June [source: Bacchus & Comus]. An Italian food festival -- a celebration of culinary pleasure in a country that understands culinary pleasure better than almost any other -- is not to be missed. Not only will you get to sample rare Ligurian wines, but vintners from all over Italy will visit with their wares. And you'll get the decided treat of Ligurian cuisine -- a happy combination of basil, garlic, citrus, vegetables, pasta and seafood.

­Liguria also has some of the most glorious landscapes in all of Italy:

Liguria's rocky hiking trails are justly famous, particularly those that connect the five villages of the Cinque Terre (sometimes spelled Cinqueterre). The best known is the Via dell'Amore, or walk of love, along which lovers through the ages have carved initials and left keepsakes, tokens and mementos [source: Riviera della Liguria].

This article explores the history of Liguria's challenging terrain, how grapes have come to grow there and the Italian wines those grapes produce.

The landscape has helped breed a Ligurian culture of self-reliance. High ­ mountains separate Liguria from much of the rest of Italy, making it relatively inaccessible by land. The ocean has historically meant freedom as well as income, and it creates a warm climate more similar to southern regions of Italy than to neighboring Tuscany [source: Demitri].

Since before the Roman Empire, Liguria's people have been known for their independence. Although Rome attempted to conquer the region, small pockets of local resistance persisted for centuries in places such as Cinque Terre [source: Travel to Liguria]. And the residents of Genoa, the capital city, fought strenuously for liberation before the Allied army arrived at the end of World War II.

After the fall of the Roman Empire, Liguria remained relatively independent from subsequent Byzantine and Lombard rule. Independence was a double-edged sword, however. Liguria largely had to rely on its own defenses when pirates such as Saracens and Normans attacked the coast [source: Demitri].

The port city of Genoa was a prominent city-state in the Middle Ages and early Renaissance. It had rivalries -- and sometimes all-out wars -- with Pisa and Venice. During these wars Genoa captured the explorer Marco Polo; he dictated his famed account of his travels to China in a Genoese prison [source: Travel to Liguria]. Another famed explorer, Christopher Columbus, was born in Genoa. Visitors can still see his house [source: Demitri].

The Napoleonic Empire finally ended Genoa's dominance. After Napoleon's defeat in 1814, Liguria was handed over to the House of Savoy and Sardinia [source: Travel to Liguria]. Perhaps it was frustration with the shift in power that motivated two native Ligurians, Garibaldi and Mazzini, to start the Risorgimento -- the movement for Italian unification that culminated in the 1860s with the nation of Italy [source: Coppa].

So how does Liguria's independence affect its viticulture? Read on.

Most Americans use the word "pesto" to mean the aromatic blend of crushed garlic, olive oil, basil, pine nuts and parmesan cheese that brings out the divine in any piece of bread or pasta. But it has a more specific name in Italy, where different regions have their own kinds of pesto. (Sicilian pesto, for example, is red and spicy.) The basil-garlic variety is pesto alla Genovese -- pesto in the style of Genoa -- and it's widely considered to be the original, the style from which all other pestos are derived [source: Liguria Foods]. ­

Compared to most of Italy's regions, Liguria produces relatively little wine -- the second lowest out­put of any region. The steep seaside cliffs don't always provide the most hospitable climate for vines -- or people. In fact, some vineyards are accessible only by boat [source: Ligurien-netz]. There's virtually no flat land, and estates are too small and fragmented for mass production [source: Italian Made].

The soil of Liguria is high in limestone -- with an emphasis on the "stone." With so little flat land, growers must raise grapes on terraces carved from the rocky slopes. The slopes do offer one advantage, though: the mountain peaks protect the grapes near the sea from the coldest winter winds blowing down from the Alps [source: Wein-Plus]. And the limestone soil is particularly good for white grapes, which acquire mineral flavors.

In the Cinque Terre, the soil is constantly buffeted by harsh, salty sea winds. It has been described as lean and parched [source: Italian Made]. But hardship for grapes can lead to extraordinary wines; dry conditions mean higher sugar content in the grapes, so it's no wonder that Cinque Terre is known for its sweet Sciacchetrà.

Unfortunately, because Ligurian wine rarely leaves Liguria, outside merchants tend to hoard it -- sometimes past its prime [source: Esposito]. If you've tasted a Ligurian white in the U.S., you may well have been disappointed. The place to drink Ligurian wine is in Liguria -- preferably at an outdoor cafe, in a temperate Riviera breeze, at one of the resort villages.

What should you order when the camariere brings the wine list? On the next page, we'll take a look at some of Liguria's notable wines.

Ormeasco grapes were brought to Liguria from Piedmont, where they were known as Dolcetto. (The varieties have now evolved separately and are quite distinct, though you may be able to tell that they are related.) In 1303, occupying Ormea, the Marchese di Clavesana issued an edict that no varieties but Dolcetto were to be planted. The penalty for planting another kind of grape? Decapitation [source: Italian Made]. ­

Liguria is best known for its white wines. Pigato likely derives its name from t­he spots (pighe) that appear on the mature grapes. It gives an accurate representation of the Ligurian landscape, with minerality and a nose of pine woods and seaside air [sources: Esposito, Liguria Food].

The Cinque Terre now produce an eponymous white, a blend of Vermentino and Bosco grapes. Cinque Terre is light and dry, best with seafood, linguine al pesto or vegetable cakes [source: Liguria Food]. Vineyards in this area are scarce, and the wines they produce are relatively rare. The rarest -- and therefore most legendary -- is the sweet Sciacchetrà [source: Made in Italy]. Over the centuries, it has won praise from Boccaccio and Petrarch; other poets assert that it's the drink of the gods themselves. Pliny the Elder called it a "lunar wine" -- reflecting the general sense that the Sciacchetrà is not quite of this world [source: Italian Made].

Speaking of lunar wines, Colli di Luna, or "hills of the moon," produces three wines, two whites (the Bianco and Vermentino) and a dry red (the Rosso), which are regulated by the Denominazione di Origine Controllata (DOC) [source: Made in Italy]. The Vermentino is a light, sweet, fruity white that comes from a Malvasia variety. You're likely to find it only on the coast -- the delicate grapes can't survive even a mild inland Italian winter [source:Liguria Food].

Rossesse dell'Acqua, Liguria's first red DOC, is intense and dry, best with game and ripe cheeses. According to some sources, the vines have been cultivated here since the days of the Phoenicians [source: Liguria Food]. The Rossesse is said to have been Napoleon's favorite wine [source: Ligurien netz].

Recent DOC designations include the Golfo del Tigullio, the Val Polcevera Coronato and the Colline di Levanto. Also worth trying: the Pornassio (or Ormeasco di Pornassio) DOC, an intense cousin of the Piedmont Dolcetto that dates back to the Middle Ages. You'll be lucky to find them outside Italy, but do try them if you can [source: Italian Made].

If you're persistent -- and if you're in good shape for hiking -- Ligurian wine will be a worthy reward. Wear comfortable shoes, pack light and don't be afraid to try something you've never heard of.

For whites, try a Barbera or Granacca di Quillano; for reds, an Albachiara or Buzzeto di Quilano. If you can, drink these wines when they're relatively young and close to the source [sources: Made in Italy, Sonkin]. ­