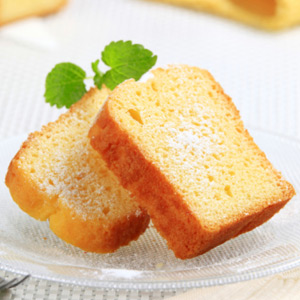 Even though they have similar ingredients, small changes make a big difference between foam and butter cakes. See more pictures of cakes and cupcakes.
iStockphoto/Thinkstock

There might be more kinds of cakes in the world than you could sample in a lifetime, but according to Joy of Baking, most of them fall into two categories: foam and butter. Foam cakes are comprised of flour, sugar, eggs, butter (in some cases) and flavoring. They get their light, fluffy texture from air beaten into egg whites, and, as a bonus, they're not as unhealthy as other types of cake. Some are completely fat free, but those containing whole egg (like sponge cake) or butter (like génoise and gâteau) have a slight amount of fat. (If a cake is air-leavened, it isn't considered butter cake even if it contains butter.)

Butter cakes, such as pound cake, depend on a chemical leavening product such as baking soda or baking powder. Of course, butter cakes tend to contain significant quantities of butter (or margarine or shortening), which adds firmness and heft. Otherwise, the ingredient list is similar to foam cakes: flour, sugar, butter and flavoring.

Though it seems like our four subjects are quite similar, we'll discuss their respective (and delicious) roles in pastry baking.

Considering Europeans' enthusiasm for dessert and decadence, we shouldn't be surprised that they pioneered many pastry innovations.

Early publications suggest the sponge cake originated in England, but by the 19th century, it was already being customized for international tastes. Pound cake, also British in origin, was popular because its simplicity made the recipe easy to remember. It stayed consistent from the 1700s until the 1900s, when cooks began to add newly-available chemical leaveners.

Génoise, another sponge, has Italian origins (perhaps from the city of Genoa), but it's been adopted for treats that are more commonly associated with French cuisine. And the accent over the "a" might have clued you in: gâteau is a proud French creation.

Despite similar composition and upper-crust ancestry, each cake has unique characteristics. On the next page, we'll discuss how to decide which might be best suited to your occasion.

Bet You Can't Eat More than One … Gâteau

A quick French lesson: "Gâteau" is the general French word for cake, but the traditional composition (and our focus) is a specific type of confection created from a spongelike batter. "Gâteaux" is the plural, referring to more than one, or, as is often found in traditional recipes, the whole category of cakes.

Sponge cake is known for a subtle flavor that pairs well with hot beverages. It has a very light texture, so it's a popular teatime snack and has a reputation for being healthy (in context, of course).

Pound cake is graced with a rich, buttery flavor, good on its own but decadent with fruit and nuts. Its dense texture is thanks to heavy-handed proportions of whole eggs and butter, which pack each slice with moist mouthfuls of fat and calories.

Though gâteau is a spongelike cake, the ingredients combine to form a doughlike composition that can end up resembling (and even substituting for) a heavy pastry. It has a rich flavor and is laden with fat and calories due to butter and eggs.

Génoise has a dry texture and delicate flavor that are well suited to other snacks. On its own, it's a fairly light cake, but be wary of the fillings and buttercreams that are usually part of a package deal.

Is your mouth watering yet? It will be soon, since the next page discusses how each cake is used (and eaten).

An experiment in the San Francisco-based group Baker's Dozen suggested that the technique of using egg whites has a big impact on a finished cake. If it's not done delicately, the egg protein structure will damage and lose potential. More than 60 chefs baked angel food cakes from an identical recipe and ingredients. After studying the array of finished cakes, they concluded that the only room for error was within the range of soft versus stiff peaks. The lesson: Whipping expertise can yield lofty results.

Which Cake to Bake 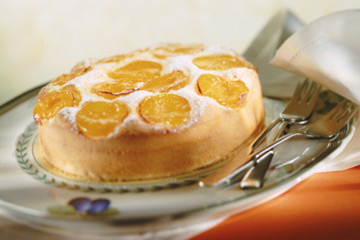 Try topping your cake with an interesting fruit like apricot.
John Foxx/Stockbyte/Thinkstock

This is where it gets fun -- envisioning one of these delicious desserts on your table!

Sponge cake slices messily, so it's not ideal for precise dishes like petits fours. However, it's a great coffee companion, because it doesn't overpower other flavors. A thin, fresh cake can be gently rolled with fruit or cream for Swiss rolls or Yule logs.

Pound cake is excellent with fruit. Cut thick slices for an impromptu berry shortcake, or adapt the recipe for a European-style candied fruitcake.

Gâteaux can make a traditional layer cake, but as we mentioned earlier, the pastry-like dough is also well suited for tarts.Since most of the flavor comes from the filling, a gâteau can be savory, such as a mushroom or vegetable tart.

Génoise often ends up as layer cake, but why not try a classier approach? The batter is the basis for madeleines and ladyfingers, delicate cookies baked in molds. Madeleines are served with tea or coffee; ladyfingers get doused with cream or liqueur for tiramisu.

Ready to give your mixer a workout? Read on!

Maybe it's overwhelming to offer four recipes at once, but remember that they're all similar in composition.

Keep in mind that though all cooks like to improvise, it's important to follow a delicate cake recipe closely. Texture and leavening depend on a precise ratio of ingredients blended together carefully. If you need some tips for developing your cake-making skills, continue on to the next page.

If you're going to indulge in experimentation, keep the following expert tips in mind. Egg whites should be room temperature before beating for the best volume. Though many pastry chefs suggest using cake flour almost exclusively, Baker's Dozen believes it may be too light for some sponge cakes and pound cakes. Mixing different kinds of sugar lends flavor variation while staying true to the basic ingredients; try brown or raw sugar for a sweet twist. And finally, in 1956, chef Louis Diat suggested baking cakes in a slow oven. Modern interpretations of this technique involve a long cooking time at relatively low temperature (about 300 degrees).