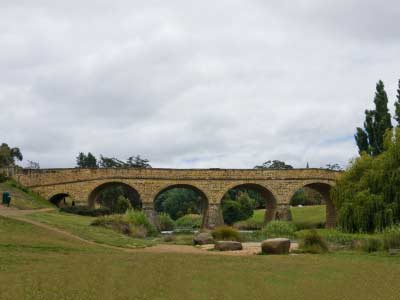 The Richmond bridge in the heart of Tasmanian wine country, Australia­. See our collection of wine pictures.
iStockphoto/Tamara Bauer

­Tasmanian wines are starting to get noticed and it might not be long before the island is known more for its Pinot Noir than it is for the Looney Tunes character Taz. When compared to many regions of Europe, Australia is considered a relative newcomer t­o the wine industry and although Tasmania was the first region to begin produ­cing wine, its modern-day wine industry only goes as far back as the middle of the 20th century [source: Wine Tasmania].

Tasmanian wine production showed great promise in its early stages but there was a period in the region's history when it all but vanished. If not for a few visionaries who saw the potential the island's cool climate and soil varieties had to offer, Tasmania might never have been reborn as the wine-producing region it is today.

­While Tasmania's seven distinct regions are making a number of wines worth recognizing, it remains relatively unknown throughout the world. Located just off the eastern coast of Australia, it is roughly the size of West Virginia, but with a much smaller population -- there are only about 500,000 inhabitants [source: George]. Its location­ plays a large role in its anonymity. First, it is not easy to get to. Second, it's able to sell most of its wine supply either straight from the wineries where it is made or in restaurants across the island. It is rare that Australian wines being produced in Tasmania find their way to the United States and Europe. Why pay the high cost of taxes and shipping associated with exporting wine when you can sell everything you make right out of your back door?

However, in recent years, the world has begun to take notice of Tasmania's cool-climate grape varieties and more and more people are beginning to invest in the future of the island. Those who have had a chance to experience Tasmanian wine know that their Pinot Noir and Riesling's are quite impressive. They also produce sparkling wines that some claim could one day be as good as those made in Champagne [source: George].

There has been some debate over the years as to which wine region in Australia can claim to be the first. Let's look at the facts. Victoria and South Australia didn't have vineyards until 1834 and 1837, respectively, and they used vine cuttings f­rom Tasmania to start them. There is no evidence of vines showing up in Hunter until 1832 and Bartholomew Broughton founded the first vineyard in Tasmania in 1823, almost a decade earlier. On top of that, the country's oldest-known bottles of wine were recently found in an abandoned cellar there [source: Wine Tasmania]. Some of them were even still sealed. As a result, Tasmania has laid claim to the title of Australia's oldest wine-producing region and there are few who would argue.

Although the early 1800s were good for wine production in Tasmania, the second half of the century would see the industry all but disappear. In 1852, workers fled the land with visions of gold nuggets in their heads. There was a gold rush in Victoria and everyone was hoping to cash in on the discovery. Without enough men to work the land, the vineyards of Tasmania slowly died. Many were replaced with apple orchards [source: Wine Tasmania]. Around the same time, in hopes of creating a more sober country, laws were passed that forbid the production of fortified spirits, Tasmania's specialty. The region fell to the way side as other wine producing regions began to thrive. It looked as though Tasmania's winemaking days were over, and that didn't change for almost a century.

Tasmania's wine industry rose from the ashes in 1956 with the help of Jean Miguet [source: Wine Tasmania]. His vineyard, known today as Providence, was successful and other wine makers followed his example. The 1960s and 1970s saw some of Tasmania's most popular wineries come to life, no doubt a result of the growing popularity of table wines throughout Australia. Today, Tasmania is also known for its sparkling wines thanks primarily to Heemskerk and Roederer.

Things are looking up in Tasmania. At least as far as wine production is concerned. Today, they produce a huge variety of wines and in the past 30 years, they have increased their yield of grapes from a meager 340,000 pounds (154 metric tons) to almost 17.5 million pounds (7,937 metric tons) [source: Wine Tasmania]. That's pretty impressive.

Are corks on the way out?

As more and more wines are produced across the world, many wine makers are abandoning corks for screw caps. Some believe that the difference from cork to cork results in inconsistent aging processes. Screw caps on the other hand can be designed to deliver the same result every time [source: Mahr]. ­

Agriculture of the Tasmanian Wine Regions

­Tasmania offers Australian winemakers something they're hard pressed to find in other regions of the countr­y -- cool climates. Of course, by most standards, Tasmania is still hot in the summer. However, when comparing the average temperatures on the island with those on the mainland, they are definitely cooler. Tasmania winemakers have even gone so far as to prove that their climate is incredibly similar to that of northern France, where some of the best wines in the world are made [source: Coorigan].

The farther north you go on the island of Tasmania, the milder the climate gets. It's coldest around Hobart, with winds th­at present a challenge to grape cultivation. Vineyards have to be protected so they can grow to maturity. The uniquely cool climate of the region provides grapes with an extended growing season and a rather dry ripening period as well [source: Tourism Tasmania]. As you might expect, grape varieties known for doing well in cool climates, like Riesling, sauvignon blanc, chardonnay and pinot noir, thrive in Tasmania. In fact, people have taken a lot of interest in Tasmania's cool climate grapes recently. Wineries on mainland Australia pay high prices for them and the rest of the world has begun to invest as well. The Pinot Noir and Chardonnay varieties coming out of the region fetch especially high prices [source: Brand Tasmania].

Aside from the ideal climate, Tasmania also offers wine makers a variety of different soil types from which to choose. Whether characterized as stony, sandy or full of clay, they all have one thing in common -- they drain very well [source: DPIW]. Grapes don't like to get too wet. Ideally, their roots are able to grow deep into the ground without getting soaked. That's why soils that drain well are perfect for the cultivation of grapes. Aside from that, stony soil has an ability to absorb heat during the day and release it slowly during the night. This is advantageous in cooler climates because it shelters grape vines from extreme temperature changes that take place from day to night.

Tasmania provides wine makers with a climate that is unique in Australia and a variety of soils that lend themselves to a number of different grape varieties. The result is a wide range of wines that come out of the region.

The different color of many wine bottles is meant to help control their aging process. The more light a wine gets, the more it oxidizes. Wines that are stored in dark places aren’t affected so color doesn’t matter, but if you like to keep your wines on display the color of the bottle definitely comes into play [source: Kraus]. ­

Tasmania is only responsible for producing 0.2 percent of the grapes that Australia uses to make wine, and yet they make one-tenth of the country's total premium and ultra premium wine supply. Now that's what you call quality over quantity. There are somewhere in the neighborhood of 240 vineyards that currently operate on the island and many of them are relatively small. All told, they only cover 2,224 acres (900 hectares) [source: Tourism Tasmania]. That works out to an average of not quite 10 acres per vineyard. Again, the focus remains on quality over quantity.

Tasmania is probably most well known for its Pinot Noir. This particular variety accounts for almost half of the island's total wine production [source: George]. Some of the best from the region can be found at wineries such as Pipers Brook and Domaine A [source: Port]. Many claim that the Pinot Noir being produced in Tasmania is some of the best in the world. Unfortunately, unless you've been to the island, you probably haven't had a chance to experience it. It rarely makes its way outside of Australia.

Rieslings have also had great success in Tasmania. This comes as no great surprise when you consider that the climate is perfectly suited for their cultivation. Surprisingly, at the 2009 Tasmanian Wine Show, more rieslings ended up with accolades than pinot noirs. The 2007 Frogmore Creek Riesling deserves special mention [source: Halliday]. Perhaps this is the beginning of a shift in wine preference on the island of Tasmania -- or maybe it was just a particularly good year for Rieslings.

Last but not least are the sparkling wines of Tasmania. The first sparkling wines bubbled onto the scene in 1989 when they were introduced by Heemskerk and Roederer. Since that time, they have been gaining quite a reputation. While their youth seems to be the only thing holding them back, some local winemakers claim that they will eventually be talked about on the same level as those being produced in Champagne [source: George].

For more wine-related information, check out the links on the next page.

Is the water responsible?­

Tasmania is said to have the cleanest air in the entire world. You can drink the rainwater if you want. Maybe that’s why their wines are so good. The water they use to cultivate their grapes and make their wines is completely free of impurities [source: I Love India]. ­