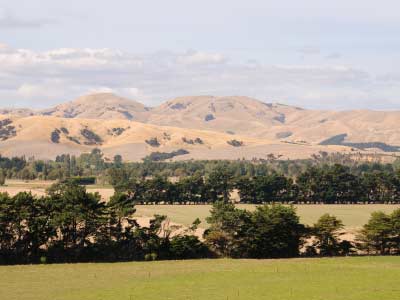 ­In the young wine culture of New Zealand, the up-an­d-coming Wairarapa region is starting to capture a lot of attention. This rural, pastoral area near the southern tip of North Island has seen a steep increase in wine production over the previous 25 years. Because of its proximity to Wellington, people sometimes refer to Wairarapa as the "Wellington wine region." The valley is a little more than an hour's drive -- a scenic one that winds around Wellington Harbour over the Hutt Vall­ey and Rimutaka Hills -- from the capital. Here a thriving tourist trade has grown up around the region's wine trails.

­­The largest town and commercial center in Wairarapa is Masterton, but the center of wine country is Martinborough, a small service town in which the streets trace the shape of the British flag, the Union Jack [source: Wines From Martinborough,]. The town was in declining straits until the 1980s, when scientists discovered the area's untapped viticultural potential. The wine industry swiftly took over Martinborough, and brought its economy back to life. Now dozens of wineries are located near the town center, and a plethora of cafes, restaurants, and bed and breakfasts cater to weekending Wellingtonians and other wine tourists. Gladstone, Masterton and East Taratahi are homes to additional wineries. Almost all the wineries of Wairarapa are small, boutique operations. Quite a few have developed excellent reputations and have won national awards.

While the first New Zealand wines to score on the global market were whites featuring Sauvignon Blanc, the Wairarapa region has raised the profile of Pinot Noir, a grape that is commonly considered to be a challenge to convert into fine quality wine [source: Dalley]. However, the area's amenable climate and soil also produce an array of vines such as Merlot, Chardonnay, Pinot Gris, Syrah, Riesling and Gewürztraminer. Let's explore the brief but interesting history of Wairarapa wine.

Unlike the celebrated wine regions of Europe, New Zealand bears no an­cient or medieval tradition of viticulture. Its history began only as Europeans settled on the islands in the early 19th century. Settlers from England, France, Spain, Germany and Croatia were among the first winemakers.

William Beetham and his French wife Hermanze, regarded as New Zealand's first commercial winemakers, planted the first known Wairarapa vineyard at Lansdowne, near Masterton, in 1883 [source: Wines From Martinborough,]. Toward the end of the century, an Italian viticulturalist, Romeo Bragato, became the government's wine expert with a position in the Department of Agriculture [source: Dalley]. Touring the nation in 1895, Bragato visited Lansdowne and praised Beetham's product, declaring it a sign of the region's wine-producing potential [source: Kelly, Martinborough Business Association]. The fulfillment of this potential was cut short a few years later due to Prohibition. The Lansdowne Vineyard stopped producing wine, and was uprooted a few years later when Masterton became a "no-license zone" [source: Wines From Martinborough].

The Temperance Movement eventually subsided, and winemaking in New Zealand picked up again in the 1960s and 1970s. Martinborough's first vineyard was planted in 1978. The following year, the region got its big break when a report written by Dr. Derek Milne of the government's Department of Scientific and Industrial Research was published. The report singled out the Martinborough area as a potentially strong wine-producing area, because the nature of its soil and climate are similar to prime French wine-producing regions such as Burgundy [source: Kiwi Wineries]. The report stated that local conditions create a particularly suitable habitat for the Pinot Noir grape.

Wine enthusiasts soon bought up properties in and around Martinborough. Among the new vineyards were Dry River, Ata Rangi and Chifney Wines [source: Martinborough Business Association]. Winemaker Larry McKenna joined Martinborough Vineyard in 1986, and the winery soon began to win national acclaim; in 1989 its Pinot Noir, Chardonnay and Riesling all were awarded trophies at Air New Zealand's annual wine competition [source: Destinations Live]. The region has continued to come of age, and is now home to a significant share of the country's best-regarded wines.

Read on to learn about agriculture and viticulture of the region.

The country’s oldest bottle of wine, a 1903 Lansdowne Claret from William Beetham’s estate, tasted superb to a reviewer in 1985 [source: Kelly]. Another bottle from the same year was auctioned off for charity in 2007 [source: Dowd]. ­

Throughout its history, Wairarapa has been an agricultural district and remains so today. The major industry is animal husbandry; two-thirds of the region's land is devoted to livestock, principally sheep and cattle. Dairy cattle remain a big industry in the area. Before the arrival of the wine scene, the area's most celebrated cultural event was probably the annual Golden Shears sheep-shearing competition in Masterton [source: Schrader]. Lamb is a popular element of the regional cuisine choice, and a good match with the local red wines.

The climate is cool, dry and very favorable for growing grapes. The mountains to the west protect the valley from the harsher weather, though the area gets strong breezes that help temper the vines. The growing season is long, and autumn is especially warm, dry and long, allowing the fruit to mature past the point of ripeness [source: Wines From Martinborough]. Several rivers, including the Ruamahanga, run through the region, bringing alluvial qualities to the soil. Limestone from prehistoric times also feeds into the character of the soil and the vines [source: Murdoch James].

Quite a few Wairarapa vintners subscribe to the idea of terroir, which means that wine expresses the particular qualities of the earth from which the grapes are grown. Toward that end, Martinborough's winemakers have created a Geographical Indication for the area, in emulation of the European appellation system [source: Wines From Martinborough]. More than a dozen Wairarapa vineyards have been accredited by Sustainable Winegrowing New Zealand, an organization maintaining industry standards for environmental "best practices" [source: New Zealand Wine].

Vineyards comprise a large proportion of the region's land. In fact, Wairarapa's wine-producing area has doubled in the past decade, while the number of individual winegrowing operations has grown by two-thirds [source: Wines From Martinborough].

If you're ready to try a glass of the region's best Pinot Noir or other variety, move on to the next page.

The town of Carterton, in the Wairarapa region, promotes its botanical bounty by calling itself the New Zealand Daffodil Capital and hosting a daffodil carnival every spring [source: Wines From Martinborough]. What next? Daffodil wine? ­

Famous Wines of the Wairarapa Region

Martinborough and the Wairarapa region represent only 3 percent of the wine produced in New Zealand by growing area. However, its boutique wineries have taken more than their share of awards and recognition, le­ading to the characterization that the region "punches way above its weight in terms of success [source: Wines From Martinborough]." The region has developed a reputation for consistent quality.

Pinot Noir is by far the region's leading varietal, commanding more than half of available vineyard space. Others cultivars include Sauvignon Blanc, Chardonnay, Pinot Gris and Riesling, with smaller quantities of Cabernet Sauvignon, Merlot, Syrah and Gewürztraminer [source: Wines From Martinborough].

Among the leading brands from Wairarapa are:

To keep from being confused, note the distinction between Wairarapa and Martinborough, both on New Zealand’s North Island, and the wine regions of Waipara and Marlborough, on South Island [source: Kiwi Wineries]. ­

Ultimate Guide to the Rhone Valley Wine Region
How many calories are in wine?
How to Tour Wine Country on Horseback