How to Read a Wine Label 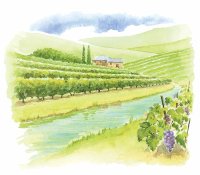 Where the grapes were grown makes a big difference in taste.
Publications International, Ltd.

Often, the first clues about a wine come from its label. Unless you have the opportunity to taste before you buy, you'll have to answer all your questions about the wine (what variety of grapes it was made from, what vintage it is, what winery produced it) simply from the information on the label.

As the saying goes, you can't judge a book by its cover. But can you judge a wine by its label? It's tempting to choose a wine with an eye-catching label. The label seems to give the wine a personality -- all those colors and graphics beckon invitingly from the shelf, clamoring for your attention. And the sheer number of wines available, even at the local grocery store, is enough to reduce anyone to eeny-meeny-miney-moe. Imagine if choosing a quality wine were as simple as liking the label!

Although there is no guarantee that you will like a wine if you like the design of a label, you may be able to determine whether you'll enjoy the wine from the information on the label. Wine labels come in all shapes and sizes, some with a bare minimum of information, others with a wealth of data that explore virtually every aspect of the wine. Most labels fall somewhere in between. Learning to read the label can give you some indication of what to expect from the wine, just as the plot summary on a book jacket can help you decide if you'll enjoy the story within.

At the very least, a close examination of the label will reveal the name of the wine and where the grapes came from. The label may also include information about when the grapes were harvested, the identity of the person or company behind the wine, the wine's alcohol content, and the bottle's net contents. Some of this information appears on the label facing the consumer, but most wines also have a "back label," which should be read as well.

Wineries must submit their labels to a government agency to ensure that they meet certain legal requirements. That's good news for anyone trying to learn more about a wine. Simply look to the label for answers to the following questions:

Who made the wine?

This is the most important piece of information on the label, because the quality of the wine depends to a great extent on the reputation of the winery. The better wineries also have a distinctive style, making the selection process much easier.

What kind of wine is it?

If the name of a grape variety appears on the label, the wine was made entirely or predominately from that grape. When two or more grape varieties are listed, the wine is a blend of those grapes. Sometimes, however (as is the case with most Old-World wines), a growing region or appellation of origin is listed instead of a grape variety. In this case, it is still possible to determine which grape varieties were used -- it just takes a little more work on your part. You'll need to know, for example, that Chianti is made from Italian Sangiovese grapes, and Puligny-Montrachet is made from French Chardonnay grapes. Some people believe that naming a growing region can actually be more informative than naming a grape variety, because different growing regions have different soil, climate, and viticulture practices--all of which can alter the taste of a wine.

A proprietary or fanciful name, such as "Insignia" or "Opus One," may not be informative if you are unfamiliar with the wine. In such a case, the back label might provide more information. If a wine is labeled "Meritage," it must be a blend of two or more of the traditional Bordeaux varieties, such as Cabernet Sauvignon, Merlot, or Cabernet Franc.

Where were the grapes grown?

The growing area or appellation noted on the label provides the source of the grapes used to make the wine. It might be as broad as an entire state or region, such as California or Burgundy, in which case the grapes came from two or more growing areas within the borders of the state or region. More specific appellations include a county or subregion; a growing area within a county or subregion, such as Napa Valley (within Napa County); and a subappellation within a larger one, such as Oakville (an area within Napa Valley). An even more specific designation is the name of the vineyard within the appellation. As a rule, the more specific the designation of where the grapes were grown, the higher the quality of the wine.

How old is the wine?

The vintage date tells you the year in which the grapes used to make the wine were harvested. If no vintage date appears on the label or neckband, the wine was made from mixed vintages. Vintage can be a very important piece of information, or it can mean relatively little. Just as the same variety of grapes grown in two different regions can produce wines that taste different, so too can the year the grapes were grown affect the quality of the wine they produce. Weather conditions, such as rainfall amounts, temperature highs and lows, can affect how well the grapes grow and, consequently, how a wine tastes. However, because weather patterns don't differ as dramatically in some parts of the world as in others, the vintage date may mean very little for certain wines. It can be difficult to sort it all out. Luckily, wine publications do it for you, analyzing vintages on a qualitative basis. This information can be a handy shopping tool, especially when purchasing expensive wines.

How is the wine different from other wines?

Some special designations refer to production techniques that distinguish the wine from others, such as barrel fermented or unfiltered, which will make the wine more attractive depending on the consumer's personal preference. Other terms, such as reserve, private reserve, special selection, barrel select, old vines, and estate bottled, indicate a qualitative distinction. In some cases, a special designation has no legal definition; it means whatever the winery wants it to mean. A prime example is reserve, which has a legal definition in parts of Europe but none in the United States. The term implies that the wine meets higher standards for ripeness or aging, and this might be true for a wine so labeled, justifying its higher price tag. However, because use of the term is not regulated everywhere, wineries may put "reserve" on the label simply as a marketing ploy. The winery's reputation should provide some guide as to whether the designation is meaningful.

On American wines, use of the term estate bottled is legally restricted. This phrase indicates that the wine was bottled where it was made and the grapes for the wine came either from the winery's own vineyard or a vineyard on which the winery has a long lease. For French wines, chateau- or domaine-bottled means the same thing. Look for the phrase mis en bouteille au chateau on a Bordeaux wine and mis en bouteille au domaine on a Burgundy wine.

This is usually stated as a percentage by volume, such as 12. 5 percent by volume. In general, the higher the percentage of alcohol, the stronger the wine.

How much wine is in the bottle?

Examples of both an American label and a French label are provided below:

Now you know about all the various types of wines, where they are made, what type of grape they are made from, and even how to read the label. What we're missing is the most important aspect of enjoying wine -- the taste! Move on to the next section to learn the finer points of tasting wine. 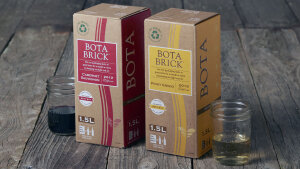