The Secret Life of Fudge 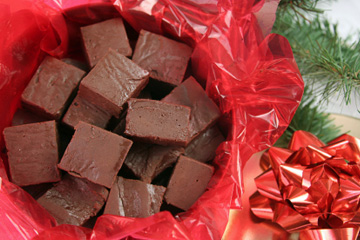 Oh, fudge, that wonderful candy with a rich, deep flavor and thick texture. It's the guilty pleasure of choice for many chocolate lovers, and fudge, in all of its many flavorful incarnations, isn't that hard to make, especially if you understand a bit about cooking chemistry, crystals and the rewards of a little patience.

Although the origins of many foods are in doubt, there's a strong suggestion that fudge was first created in the Eastern United States in the late 1800s and is the result of a happy accident made by one, or possibly a group of Vassar College students attempting to make caramels. We find the first mention of it in a letter written by Emelyn Battersby Hartridge about a recipe she'd obtained from the cousin of a school friend.

No one knows if fudge started life with its distinctive name, or just exactly how the name became popular, but by 1895, carrying the "fudge" moniker, it appeared in a nationally syndicated write up in the Boston Globe. Fudge had made the big time [source: Practically Edible].

The Secret of Fudge

To look at a simple fudge recipe, you'd think that making this king of confections would be a breeze. You aren't just heating up the mixture, though, and that's where potential problems start. Even though most fudge recipes use a simple combination of butter, sugar, flavoring and milk, there's more going on than meets the eye.

Good fudge is all about the sugar crystals. Big sugar crystals make fudge taste grainy, while very tiny sugar crystals result in a creamy, sweet fudge that tastes like, well, great fudge. It takes timing and patience, but once you've made a successful batch, you'll never feel the same way about store-bought fudge again.

There are some ingredients that have been used in fudge recipes over the years to make it easier to cheat your way to a consistently OK product, like condensed milk and corn syrup, aren't necessary. A simple recipe that calls for the basic four ingredients above is all you really need.

Now that you have the secret to superior fudge, you can become the go-to fudge guru in your family and develop signature varieties, like pistachio fudge and orange macadamia nut fudge. With a little help from science, you can have consistently dense and creamy fudge every time. That's a tasty secret worth learning.

If you love sweet stuff, you're not alone. The average American indulges in almost 25 pounds of candy each year [source: Nourishing Thoughts].