Browse the article How Ketchup Works 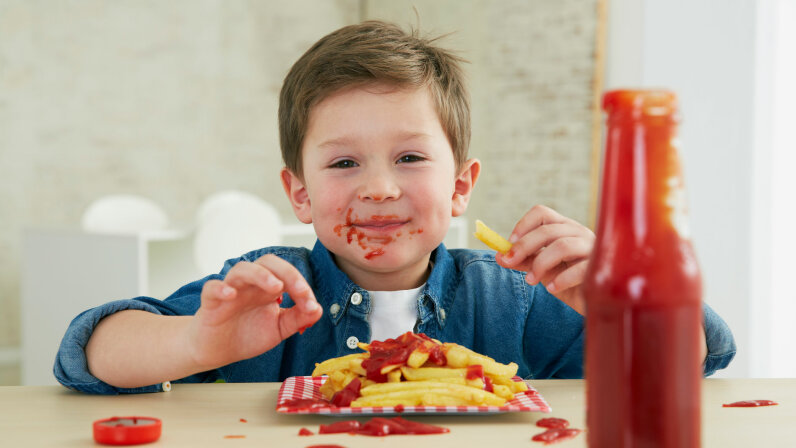 Kids have a special love for ketchup. Westend61/Getty Images

About 97 percent of Americans have a bottle of ketchup in their kitchens [source: Newman]. With such a devoted fan base, you'd think ketchup was a U.S. invention. Far from it. Ketchup, or ke-tchup as it was originally called, was first created in Asia. The earliest recipe on record was found in China, dating from 544 C.E. and was a recipe for preserving fish. Ketchup took a winding route to North America, traveling first to Europe in the 1600s via Dutch- and English-flagged ships. By the mid-18th century, ketchup was a British staple [sources: Gandhi, Bratskeir]. But it wasn't the condiment you might know.

The original ke-tchup was a spiced sauce made from various items such as anchovies or lemon, but not tomato. The addition of tomatoes didn't happen until America's colonial period — tomatoes are a plant native to North America. After the Civil War, tomato-based ketchup became entrenched in American society [sources: Gandhi].

Originally, Americans used ketchup as an ingredient in foods such as pies and sauces. They also ladled it onto meat, fish and poultry during cooking, much like barbecue sauce. It wasn't until the early 20th century that ketchup was reinvented as a condiment, when hot dogs, hamburgers and french fries entered the American diet [source: Smith].

Tomato ketchup has been the standard in the U.S. since the late 1800s. In 2004, Malcolm Gladwell wrote an article for The New Yorker asking why so many varieties of mustard exist, yet ketchup hadn't changed much over the past 100 years. The answer, he said, was that ketchup (as perfected by Heinz) appealed to all five fundamental tastes on the human palate: sweet, salty, sour, bitter and umami. "How many things in the supermarket run the sensory spectrum like this?"Gladwell wrote.

That's not to say no company has ever innovated its ketchup recipe. You can find it in flavors such as jalapeño, balsamic vinegar, and caramelized onion and bacon. There are ketchup-flavored chips on grocery store shelves, and Baskin-Robbins even once flirted with ketchup-flavored ice cream [source: Nelson]. Thankfully, that one never left the test labs. One's love of ketchup does have its limits. 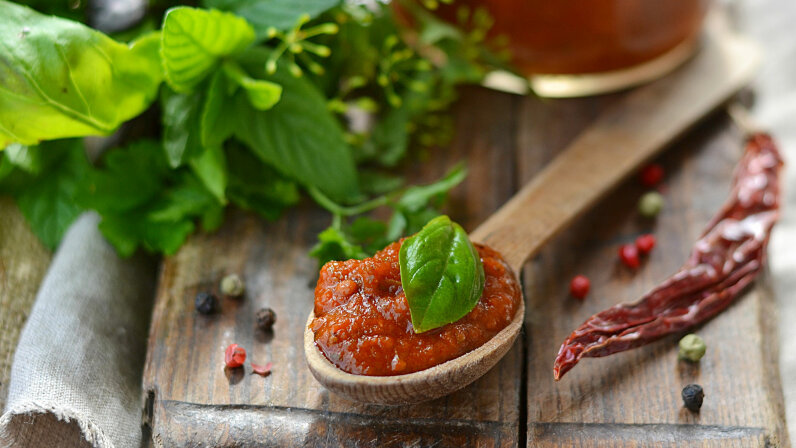 How about topping your next hamburger with the stomach, intestine and bladder of a yellow fish? Those were the ingredients in the first ketchup recipe ever recorded. Because back in ketchup's early days (the 6th century), in China's Fujian province, the sauce was a bitter pickled fish brine [sources: Lewis, Bratskeir].

Luckily, that recipe changed considerably as the original ke-tchup traveled around the globe. America's first printed ketchup recipe, published in 1758 in "The Compleat Housewife," was created from anchovies, cloves, ginger and pepper. The sauce was actually more like a chutney [source: Gandhi].

In the early 1800s, Americans began experimenting with their own homemade ketchups, preparing them with ingredients like shallots, oysters, lemons, walnuts, elderberries, mushrooms and beer. (Fun fact: Author Jane Austen was supposedly a fan of walnut ketchup.) The first-known tomato-based ketchup recipe was published in 1812, but the red version really became popular after the Civil War. In 1871, Henry J. Heinz began selling tomato ketchup. He also created the iconic octagon-sided ketchup bottle in 1890 [source: Heinz]. Now, you can only find them in restaurants.

Today's commercial ketchups typically contain tomatoes, vinegar, salt, sweeteners, onion powder, spice and natural flavors. That may sound harmless, but ketchup contains a lot of sugar, and often in the form of high fructose corn syrup and corn syrup. Some ketchups today have swapped sugar for the corn syrups and contain less salt to meet consumer demands. Still, one tablespoon of ketchup contains about 15 to 20 calories [source: Carr].

If you'd like to make your own, it's not that difficult. But using fresh, ripe tomatoes is key to creating a tasty sauce. One top-rated ketchup recipe, published on The New York Times' website, calls for tomatoes, red wine vinegar, dark brown sugar, salt, black pepper and Worcestershire sauce. Supposedly the result is a zesty sauce akin to the classic Heinz recipe.

Once your ketchup bottle is opened, should you store it in the fridge or cupboard? This was the subject of a Twitter war in 2017. Here's the verdict from Heinz: "Because of its natural acidity, Heinz Ketchup is shelf-stable. However, its stability after opening can be affected by storage conditions. We recommend that this product, like any processed food, be refrigerated after opening. " 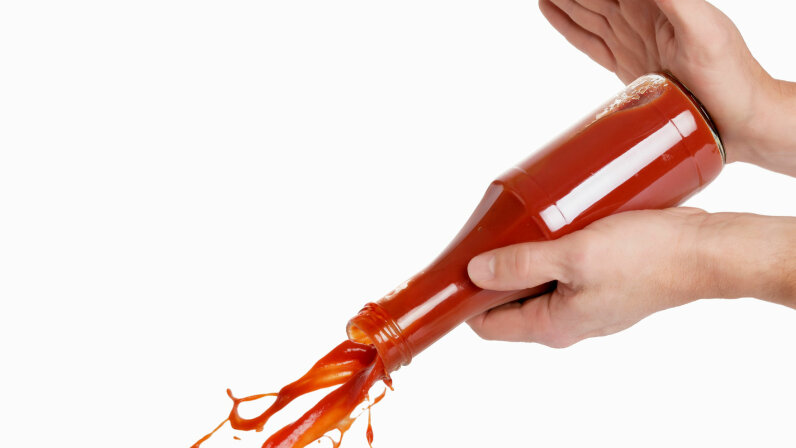 Ketchup is what scientists call a non-Newtonian fluid. That makes it hard to get out of the bottle. Kroeger/Gross/Getty Images

So, Americans fell in love with tomato-based ketchup. But there was just one problem: Ketchup didn't flow easily out of a bottle. You had to thump the bottom of the bottle to get it pouring, or stick in a knife or straw. That's because of ketchup's physics.

When you thump the bottom of a ketchup bottle, the external force you're providing decreases— or thins out — the condiment's viscosity so it can more easily flow out. But if you hit the bottle too hard, the ketchup will shoot out, probably spewing more than you wanted.

For years, scientists tried to solve this dilemma. One idea was ketchup packets, which debuted in 1968. But they never became that popular, except at fast-food chains. In 1983, plastic squeeze bottles were unveiled. They released ketchup faster than glass bottles, but they tended to make funny, farting noises when squeezed. The plastic bottles also created "ketchup juice," the unappetizing, watery squirts that come out of a bottle when it's nearly empty (the industry term is serum.) Sadly, squeeze bottles still didn't give you that much control over where and how much ketchup shot out [sources: Adams, Poon].

The problem was solved in 1991 when the owner of a precision-molding shop named Paul Brown created a new silicone valve for liquids in plastic containers. This valve had right-angled slits cut into it that opened when you squeezed the bottle, allowing liquids to flow out neatly. But the slits also closed back up when you stopped squeezing, sealing the fluid back inside. The design was sold to shampoo companies and sippy-cup makers, and, years later, to ketchup companies.

In 2002, Heinz and Hunt's (its main competitor) introduced this new valve when they debuted upside-down bottles. The ketchup caps for these new bottles features a new grooved section that trapped ketchup juice and mixed it back in with the ketchup [source: Greve].

There still is one problem remaining with ketchup bottles, however. You can't squeeze all the fluid out of the bottle. (This also happens with other non-Newtonian fluids such as shampoo and toothpaste.) Luckily, this petty issue should soon be solved as well. Kripa Varanasi, a researcher at the Massachusetts Institute of Technology, recently invented LiquiGlide, a product that makes a surface slippery. If ketchup manufacturers coat the insides of their bottles with LiquiGlide, the consumers will be able to get every last drop out of them [source: Chandler].

In the 1800s, Americans mainly used the word "catsup" to describe the tangy, red sauce they were quickly growing to love, while Brits preferred "ketchup." (Interestingly, English-speakers pronounced both words the same.) H.J. Heinz started off calling its product "catsup," but quickly switched to "ketchup" to distinguish it from its competitors. Both "catsup" and "ketchup" were found on American grocery store shelves until the 1980s. Del Monte held on to "catsup" until 1988 before giving in [sources: Diffen, Harris].

Ketchup Around the Globe 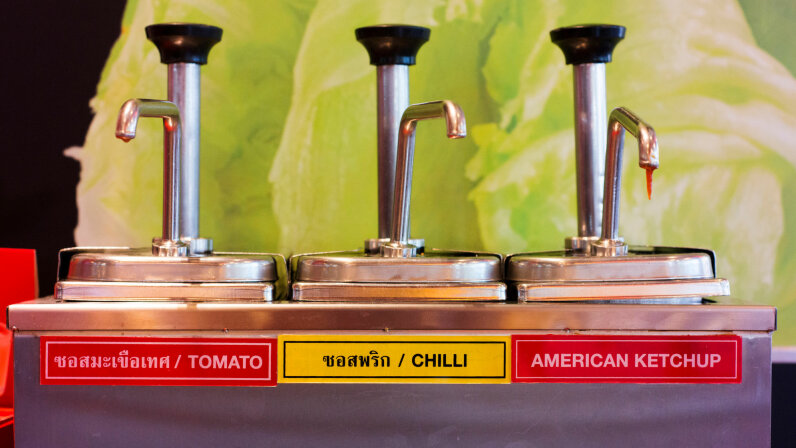 Although today's ketchup certainly isn't the Worcestershire sauce-like ke-tchup of yesteryear, that doesn't mean the recipe is the same around the globe. Many American companies, including ketchup manufacturers, have international subsidiaries that produce their products overseas. Sometimes these subsidiaries tinker with a product's recipe to fit local taste buds. Ketchup fans in England and Venezuela, for example, are sold a sweeter ketchup than Americans, who favor a spicier tang. And Filipinos love their sweet banana ketchup, which doesn't taste like bananas.

While Americans devour tomato ketchup, they're not its No. 1 fans. That would be the Canadians and Finns. With tastes varying around the globe, it's also not too surprising that people use ketchup in different ways. People in Sweden squeeze it over pasta, for example. Thais use it as a dip for potato chips. And Eastern Europeans favor it on pizza [source: Scoble].

In some countries — quelle horreur! — ketchup isn't even in people's stream of consciousness. The biggest condiment in China, for instance, is fermented bean curd. Residents of Belize go crazy for habanero pepper sauce, while Serbians opt for ajvar, a smoky red pepper-and-eggplant relish. Even in the U.K., where ketchup is popular, brown sauce wins out. A staple in most British homes, it's made with malt vinegar, molasses and dates, and used on top of just about everything [source: Parmar].

Of course, as immigration changes the ethnic mix of a country, its taste buds change as well. In the U.S., Latino immigrants helped push salsa to the top of the condiment rankings in the 1990s, leaving ketchup behind [source: Heitz-Wald]. And thanks to both Latino and Asian immigrants, hot sauce — while still far below ketchup in popularity— is on the rise. Between 2000 and 2013, hot sauce sales soared 150 percent — more than the sales of barbecue sauce, ketchup, mustard and mayonnaise combined [source: Ferdman and King].

Speaking of mayo, mayonnaise is actually the chief condiment in the U.S. In 2013, the mayo market was worth $2 billion versus $800 million for ketchup [source: Ferdman and King]. (Salsa is now the second-most popular condiment). However, both ketchup and mayonnaise had flat or declining growth in 2016, while chili sauces like sriracha experienced strong growth. Millennial consumers prefer spicier and more flavorful products than their parents did [source: Euromonitor]. This explains why you can buy sriracha ketchup in the grocery stories.

Perhaps ketchup is headed the way of ke-tchup. If so, it's been one spicy-sweet ride.

The high acidity of ketchup makes it good for a number of cleaning activities. You can shine your copper pots, some car parts and even your silver jewelry with ketchup [sources: Good Housekeeping, Huffington Post].

My earliest memories of ketchup involve pouring copious amounts onto my scrambled eggs to "enhance" their flavor. (What was I thinking?!) I still love the stuff — what proud American doesn't? — but I use it sparingly and often prefer mustard, salsa or my new favorite, Sriracha mayo.