by Charles W. Bryant
Prev NEXT
10 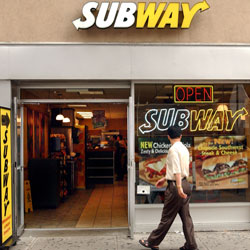 It may feel like a newer franchise, but Subway actually started out in 1965 as a means f­or co-founder Fred DeLuca to help pay for college. Since then, DeLuca has been able to pay for a lot more than tuition fees. In 2006, he was named by Forbes Magazine as number 242 on the list of richest Americans, with a net worth of about $1.5 billion [source: Forbes]. In 2008, Subway celebrated being in business for 43 years. The sandwich chain has grown from a single shop to more than 30,000 franchises in 88 countries around the world [source: Subway].

Subway stands alone as the largest sandwich chain in the world and operates more stores in the United States, Canada and Australia than McDonald's does. How does this kind of growth translate into sub sales? In the United States alone, Subway sells almost 2,800 sandwiches and salads every minute. The company's Web site also touts another interesting fact -- if all the sandwiches made by every Subway store in a year were placed end-to-end, they would wrap around the Earth at least six times. No word on how many millions of gallons of mayonnaise that means.