by Charles W. Bryant
Prev NEXT
7 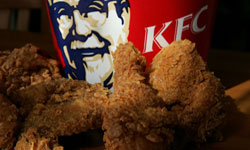 ­Fried chicken is known as a staple food of the Southern United States, but its appeal is clear all over the world. In 1930, in the throws of the Great Depression, a man named Harland Sanders opened a fried chicken restaurant in the front room of a gas station in Corbin, Ky. The Sanders' Court & Café would grow and expand as the Kentucky Fried Chicken (KFC) franchise and become the most popular chicken restaurant on Earth.

­As of 2008, KFC operates more than 11,000 restaurants in more than 80 countries. Founder Colonel (honorary) Harlan Sanders first began selling his famous "Original Recipe" chicken with its 11 herbs and spices in 1940, and the iconic bucket came along about 17 years later. In 1969, KFC became a publicly traded company, and in 2006, the company sold more than one billion chicken dinners [source: KFC]. Even though KFC was doing well on its own, it joined YUM! Brands, Inc., in 2002 to become part of the largest restaurant group in the world. KFC's partner chains include Pizza Hut and Taco Bell, both listed on this top 10.