by Charles W. Bryant
Prev NEXT
6 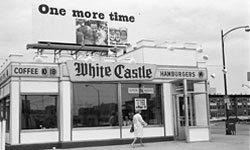 White Castle fries only come in one size. Or at least that's what the Beastie Boys say.
Alvis Upitis/­Getty Images

If small, square hamburgers are your thing, then you're probably a fan of either Krystal or White Castle. Both fast-food chains are known for the small hamburgers that customers gobble down several at a time. Since White Castle is the original, we'll give them the nod in this case. Walter Anderson and Billy Ingram partnered up in 1921 to create the first fast-food hamburger restaurant, selling their signature "Slyders" for five cents each. The restaurant's name matches the look -- each White Castle restaurant looks like a white castle.

In 1949, White Castle made a change that would end up being its legacy. It made five holes in each square patty and cooked the meat on top of a bed of diced onions. The burger never makes contact with the griddle and is cooked by the steaming onion. The holes allow for a faster, more even cook. The buns are placed on top of the meat to soak up extra flavor as well. Add a slice of dill pickle and you have an American institution -- the Slyder.