10 Creative Ways to Use Banana Peppers

Browse the article 10 Creative Ways to Use Banana Peppers 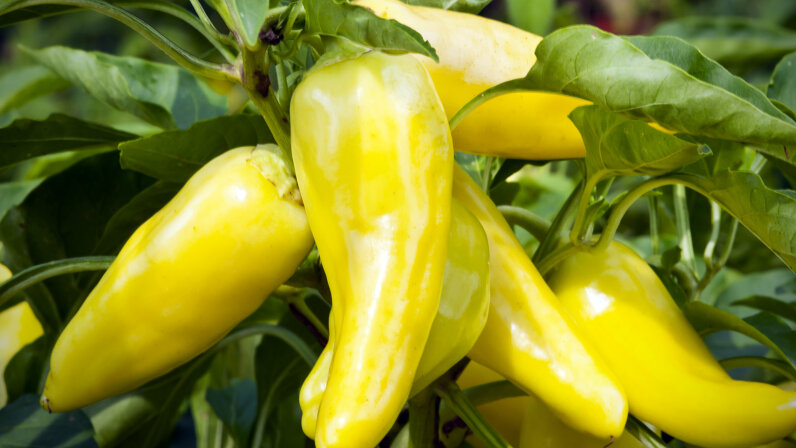 If you have a bumper crop of banana peppers, we've got tons of ideas for what you can do with them. rudisill/Getty Images

If you're a backyard gardener, you're probably used to having more vegetables than you know what to do with. Maybe you're one of those people walking around the office or the neighborhood with a basket of zucchini, practically begging someone to take it off your hands. There are just some veggies that grow like crazy.

And the banana pepper is no exception. It's easy to grow, comes in both sweet and hot varieties and is a good source of fiber, beta-carotene, and vitamins A and C. You'll know when a banana pepper is ready to be picked because it's yellow in color and the shape of a banana. Hence the name.

Now that it's the end of the growing season, and you've let your garden veggies ripen on the plants before you harvest, you're likely to end up with a late bumper crop before your plants call it quits for the year. If nature's given you plenty of those banana peppers, and you can't eat them all the same day, don't refrigerate them. So, what do you do with a bushel of banana peppers? We've got 10 delicious creative ways to use them. Remember, banana peppers rate fairly low in Scoville Units, (how hot they are) — so most of these ideas are kid-friendly. Click ahead for 10 ways to use your garden's banana peppers.

Sure, pepperoni, mushrooms and sausage are great pizza toppings, but how about looking to your backyard garden for veggie toppings? It'll be healthy and tasty at the same time. Banana peppers are tangy and sweet, so their flavor mixes well with cheese and other toppings; think cured meat or a green leafy vegetable, like spinach or arugula. Here's a quick recipe:

Make your own pizza dough and sauce (or buy some at the grocery store). Roll out your dough, leaving a border around the edge for your crust. Ladle on a thin layer of sauce, spreading it around with the back of the ladle. Sprinkle on grated mozzarella cheese. Next, place a layer of torn arugua leaves on the pie. Top with small sliced pieces of cured Italian salami. Top the whole thing off with sliced rings of banana peppers. Bake on a baking sheet for 20 to 25 minutes at 450 degrees Fahrenheit. Top with grated Parmesan cheese. Delicious! 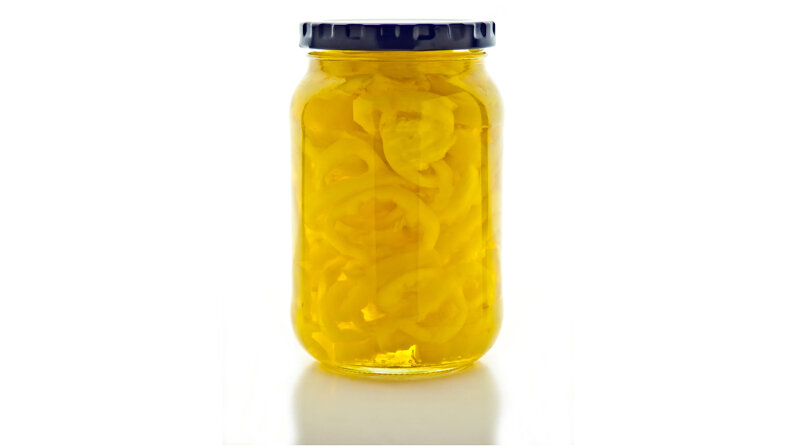 Chow chow is a popular Southern relish that's easy to make, but does require you use home canning methods. Bill Boch/Getty Images

If you're dealing with a serious bumper crop of banana peppers, think about pickling and canning them. That way you can use up a whole lot in one go, and also enjoy your banana peppers all year round. Plus, the pickled peppers are delicious in a variety of meals, especially on top of hamburgers and hot dogs during picnic season. (And, "pickled peppers" is really fun to say.)

We won't get into the details of canning here — if you've never canned vegetables before, read up on that first to ensure you sterilize everything safely. Following is the typical pickling recipe for banana peppers. You can always add ingredients to customize it — some people like to add jalapeño peppers for a kick of heat; some add garlic. Be creative.

Wash banana peppers and removed the stems. Slice banana peppers into rings about a quarter inch thick. In a saucepan, bring add remaining ingredients and bring to a boil. Fill up sterilized canning jars with your peppers and cover with the boiling liquid. Can according to instructions.

We've all seen stuffed green peppers. Not everyone likes the taste of bell peppers, though. What about trying it with banana peppers instead? Banana peppers have a much milder taste than bell peppers, and bring a different flavor to the traditional dish. You can make stuffed peppers meaty or meatless, depending on your preference. If you don't eat meat, think about using rice, quinoa or some other meat alternative.

Use about a pound of meat for every four good-sized banana peppers. Use mild or spicy, whatever your preference. Slice the top of the pepper, making it into a sort of flip-top. Brown sausage or ground beef in a skillet and set aside. In a large bowl, mix bread crumbs, Romano cheese, an egg, and some salt and pepper together. Stir in the meat and add more bread crumbs/cheese or another egg, depending on how moist or dry you want the stuffing. Gently fill the peppers with the stuffing and close the tops of the peppers. Fry the peppers in olive oil until each side is browned. Serve with a bit of marinara sauce and some grated cheese on top, if desired.

The secret to the Southern recipe is saltine crackers. Wash the banana peppers and slice lengthwise. Remove seeds and pat dry with a paper towel. Soak the peppers in milk, then dip in a mixture of flour and crushed saltine crackers. Fry in hot vegetable oil until golden brown. Remove with tongs, drain on paper towels, and serve while still warm.

Fried banana peppers taste great on their own, with cocktail sauce or even with ranch dressing for dipping. Give your family a variety of dips to choose from!

Jalapeño poppers have been popular among bar food junkies for eons. The peppers are split open, typically filled with cream or cheddar cheese, and battered and deep fried. If you're a fan, you'll probably love banana pepper poppers, too.

Wash the banana peppers and pat dry. Cut in half lengthwise and remove seeds. Fill each half with cream cheese. Here comes the good part. Wrap a small (about a third of a slice) piece of bacon around each pepper and stick a toothpick through to hold. Place them on a baking sheet and bake at 375 degrees until the bacon is crispy. Warning: These are addictive!

For variations on the theme, mix in shredded cheeses like parmesan, Gouda or Monterey Jack. Forgo the bacon altogether if you don't eat meat or don't like bacon. Or, top the cream cheese mixture with bread crumbs. Add salt, pepper, garlic powder, paprika.

Chowchow is a relish that's popular in the South, originally made with whatever assortment of vegetables found at the end of the harvest — peppers, onions, cabbage, and green tomatoes, and sometimes cucumbers and cauliflower florets. Also called piccalilli, it's often used to add a spicy, sweet, and acidic note to a bowl of lima beans, pinto beans, or black-eyed peas. Here's a recipe for chowchow you can make with banana peppers:

Combine chopped vegetables with salt. Cover with hot water and let stand 12 hours. Drain and press in a clean white cloth to remove all possible liquid. Tie spices loosely in a spice bag. Combine vinegar and brown sugar in a saucepan, add the bag of spices, and bring to a boil. Add the drained vegetables and boil gently 30 minutes or until the volume of the mixture is reduced by one-half. Remove the spice bag. Transfer to a clean jar, cool and refrigerate for up for seven days, or you can also can the chowchow using home canning methods. (Recipe adapted from the National Center for Home Food Preservation)

Shishito peppers usually get this treatment — you'll find blistered shishito peppers on menus at Japanese restaurants, and they've become a trend that chefs in other types of restaurants are using, too. There's no reason you can't use the same technique to enjoy your banana peppers.

To blister banana peppers, wash and dry them thoroughly. Heat a cast iron skillet over medium high heat, and add 1 tablespoon of peanut oil or avocado oil. Swirl the pan to coat it with the oil. Once the oil is hot, add the peppers. Let them split and char in spots, turning them occasionally with a pair of tongs. Remove them from the pan and salt them immediately. Serve them while they're hot.

If you love a salad dressing that gives your greens a little spicy kick, then go one step further with your banana peppers: Instead of putting slices on your salad, liquefy and pour them on your salad. Not straight up, though — you'll want to make a vinaigrette, which is very easy. Here's how to do it without a recipe:

Combine Champagne vinegar, a squirt of Dijon mustard, banana peppers, chopped shallots and chopped garlic cloves together in the jar of a blender and blend until the vegetables are pureéd. Take note of the amount of total liquid in the blender (or pour it into a liquid measuring cup, take note of the amount and return it to the blender jar). A vinaigrette is a ratio of one part liquid to three parts oil, and what is in the blender jar is the liquid. Multiply the measured amount by three; that is the amount of canola, grape seed, or olive oil you'll need. Remove the center piece from the lid of the blender jar and turn the blender on. Add all of the oil in a slow, thin stream, until the mixture is emulsified. Add salt, black pepper, and sugar to taste, and blend again to combine. Store your vinaigrette in an airtight container in the refrigerator for up to a week.

Love chips and salsa? Why not try banana pepper salsa? Here's how to make it. (Or simply add some chopped banana peppers to your favorite salsa recipe.) Omit the jalapeño to adapt the recipe for children or others who don't like spicy heat.

1 garlic clove, minced or grated on a rasp grater

Combine the ingredients together; taste and adjust for salt. Serve immediately or within a day. 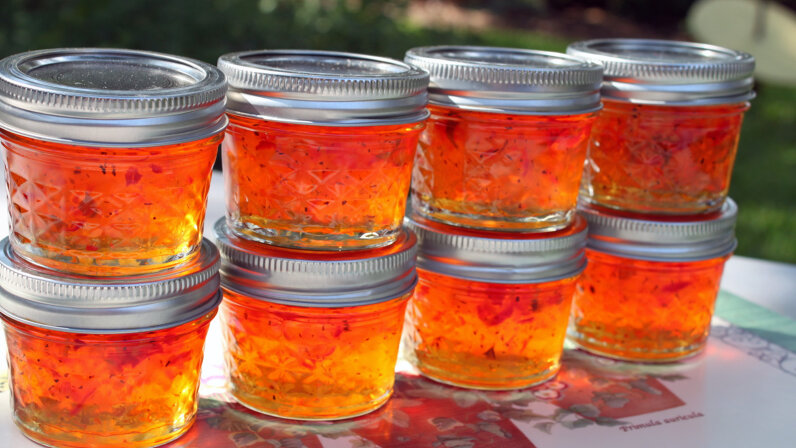 Change up your traditional pepper jelly by using banana peppers instead of green peppers. Wikimedia Commons

In some parts of the U.S., a holiday party just isn't complete without pepper jelly, cream cheese and crackers. Homemade pepper jelly makes this appetizer a personal gift to guests. You'll want to follow proven guidelines for canning, which requires some precision but isn't difficult.

To make pepper jelly, try the Golden Pepper Jelly recipe from the National Center for Home Food Preservation, using 5 cups of chopped banana peppers in place of the bell peppers. You'll puree the peppers with other ingredients to make a pepper juice, then you'll add sugar and pectin to make jelly, then fill sterilized jars and process them to seal them. Pectin is a naturally occurring type of fiber that's found in apples, lemons, pears and other fruits and vegetables; peppers only have a small amount, so you'll need the added pectin in the recipe. 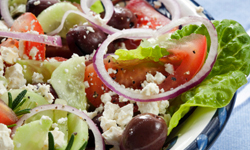