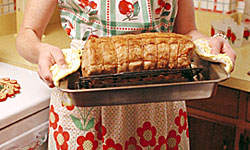 Though you may want to go for something more ambitious than a roast, little touches like a hostess apron in an intensely retro print will bring your guests back to the nifty '50s.
Tim Bieber/The Image Bank/Getty Images

The 1950s were much more than poodle skirts and saddle shoes. The era was filled with dinner parties and adventurous dishes, too. Need evidence? Just flip through a vintage cookbook brimming with crowd-pleasing recipes for pupu platters, Spam loaves and frankfurter casseroles.

These throwback recipes are the perfect inspiration for throwing a 1950s dinner party. Brought to life by a generation of homemakers on the cusp of a fast food revolution, midcentury fare embodies a time when home-cooked meals were the norm -- and served with gravity-defying Jell-O salads, in both sweet and savory varieties, on the side.

Throwing a 1950s dinner party is fun, but it's no small feat. After all, during this decade a typical day began by frying bacon, poaching eggs, flipping pancakes, baking apples, brewing coffee and pouring milk. And that was just breakfast. On a Wednesday. You can imagine what dinner must have been like.

To get you started, we're sharing our top five tips for throwing a 1950s dinner party; it all begins with a few retro recipe sources on the next page.

Make your 1950s dinner party authentic by scouring vintage cookbooks for recipes. You can find them for resale online and from used bookstores. In addition, a number of classic cookbooks have been resurrected for reprinting. The 1953 edition of "The Better Homes and Gardens New Cookbook," for example, is once again for sale -- and on the shelf at many public libraries. There are several Web sites and blogs devoted to midcentury recipes, easily found through a Google search. Your favorite food and recipe magazine may have an online archive that dates back to the 1950s. Or, you can ask your mother or grandmother for a few family favorites from her recipe collection.

Delve into nearly any 1950s-era cookbook and you'll find a plethora of Spam recipes. This precooked, processed combination of meats (mostly pork) was compressed and canned for consumption. Popular in Hawaii and adapted by American cooks for trendy Polynesian-style dishes, Spam was a mainstay of many postwar kitchens. 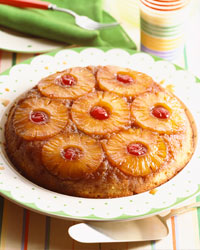 In the 1950s, themes were the thing. Midcentury partiers were mad for Hawaiian -style luaus. And you will be, too -- if you're open to a liberal smattering of kitschy decor to set a tropical mood.

Set up a tiki bar and serve umbrella drinks in coconut containers. Hang reproduction posters from the 1950s that depict Hawaiian travel, and decorate tables with ukuleles, palm fronds and pineapples. If you're feeling really ambitious, the table centerpiece can double as the main dish: roasted pig. For a fitting soundtrack, play "Lovely Hula Hands" by Bill Campbell, "Tiny Bubbles" by Don Ho and, of course, "Blue Hawaii" by Elvis.

To give your dinner party an elegant twist, head more toward "Mad Men" territory. For style inspiration, revisit "I Love Lucy" reruns or watch "To Catch a Thief," the 1955 film starring the iconic Grace Kelly and Cary Grant. Your Hollywoodesque menu might include duck a l'orange, French-style green beans and blini canapes (topped with caviar if you're dead set on extravagance). Play a big band soundtrack featuring a crooning Bing Crosby, and be sure to have a few Martin Denny tunes on hand. Yes, Denny was known as the king of the tiki hut, but he'll still provide the right vibe to set the 1950s mood, whatever theme you choose. 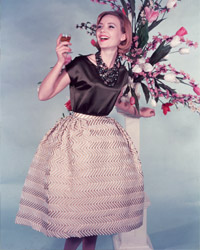 Selecting the correct garb for a 1950s dinner party doesn't require a freshly tailored vintage outfit. But you must forget what you know about "casual" attire -- at least for a few hours.

Today's casual dinner parties may allow khaki shorts, bowling shirts and flip-flops, but other guests would have been aghast if you'd darkened the doorway of a midcentury bash in such an ensemble.

To keep your dinner party looking the part, gents should wear a sleek suit and tie (either wide and pattered or skinny and plain would be retro-fashionable), while gals should wear a cocktail dress or skirt and blouse with kitten heels. And, if you're the hostess, be sure to slip on a vintage apron -- or a period reproduction -- as you perform your kitchenly duties.

Don't forget to dress your table, too. Busy patterns and bold colors were popular for both clothing and decoration, so don't be afraid to go big. If you don't happen to have a 1950s tablecloth handy, you could make your own using fabric from a thrift store or craft shop (look for large, watercoloresque floral or fruit prints on white backgrounds) and hem it with hemming tape if you don't have the time or patience to sew. 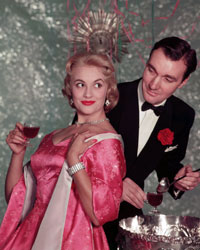 A decorative punchbowl (and its flirtation-encouraging contents) will add to any festive atmosphere.
Chaloner Woods/Hulton Archive/Getty Images

In the 1950s, "fast" meals were more complicated than emptying a box of noodles and stirring in a packet of powdered cheese. In fact, recipes for fricasseed chicken or lamb stew were commonly suggested for no-fuss weeknight meals. Lucky for you, whipping up a few cocktails for your 1950s dinner party won't be as complicated.

Of course, if your '50s party has a luau theme, you'll want to make something rum-based, like an old-fashioned daiquiri -- mix 3/4 ounce (22 milliliters) of fresh-squeezed lime juice, 1 ounce (30 milliliters) of simple syrup and 1 1/2 ounces (45 milliliters) of white rum in a cocktail shaker with ice, shake for several seconds, then strain into a cocktail glass and garnish with a thin slice of lime. You can make your own simple syrup by simmering equal parts white granulated sugar and water in a saucepan until the sugar dissolves -- the syrup will keep, refrigerated, for about a month.

For a non-alcoholic standby, reconstitute a space-age drink: Tang. This brightly colored, orange-flavored drink wasn't actually invented for NASA, but since several early astronauts, including John Glenn, drank it during space flights, it's a nostalgic conversation starter.

1: Pick Up Etiquette from Another Era 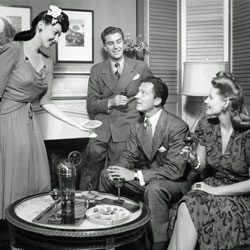 "Emily Post's Etiquette: The Blue Book of Social Usage" (1950) included mannerly advice for middle-class women who -- without the high-society aid of hired help -- acted as cooks, waitresses and hostesses of their own dinner parties. They were encouraged to greet their guests warmly and remain gracious under all manner of circumstances, from fallen souffles to uninvited attendees. Guests, meanwhile, were expected to arrive exactly on time and be pleasant participants in whatever activity the host offered, from photo album perusal to post-dinner party games.

"Amy Vanderbilt's Complete Book of Etiquette" (1957) was also full of instructions -- right down to second helpings: "If only one guest has taken seconds, when the platter is passed to you, it's sociable to take a small amount to 'keep him company.'"

Post and Vanderbilt weren't the only pundits offering life guidance -- many 1950s cookbooks did, too. The 1956 edition of "Betty Crocker's Picture Cook Book, Revised & Enlarged" offered pithy instruction on everything from cleaning your home ("If you feel tired, lie down on the floor on your back, put your hands above your head, close your eyes, and relax for 3 to 5 min.") to personal outlook ("Every morning before breakfast, comb hair, apply make-up, a dash of cologne, and perhaps some simple earrings. Does wonders for your morale").

These days, what with our ever-evolving, increasingly hectic social lives, it's no wonder we're sometimes nostalgic for a time when the rules seemed crystal clear.

In order to have a party, you first need to invite some guests. Here is a great way to personalize and hand-deliver your dinner party invitations.