How to Scale a Recipe 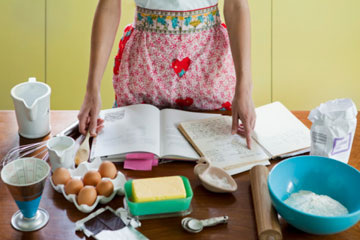 Scaling a recipe depends a lot on which ingredients you're using and how you intend to cook it. See more cupcakes and cake pictures.
Dimitri Vervitsiotis/Photographer's Choice/Getty Images

When you scale a recipe by adjusting ingredient quantities, you increase or decrease the amount of food it produces. Sounds simple, right? In reality, this can be oh-so-complicated -- especially if you're trying to use half an egg to reduce a batch or whip up a birthday cake that serves 80. In lieu of a brain-tickling algorithm that adjusts ingredients and servings, we'll let you in on a few simple rules.

Like most cooks, your dinner probably starts at the local market. If doubling a recipe, you'll buy twice as much of the main ingredients such as meat, poultry, seafood, pasta or vegetables. From a shopping standpoint, you'll want to round your ingredient quantities to whole numbers.

As you're putting pencil to paper, keep in mind that most recipes shouldn't be increased more than four times [source: AllRecipes]. We'd even argue that twice is a good limit. If you need to serve more people than a double recipe will accommodate, make the original recipe in several batches. You may have to do a little more mixing, but the end result should be more predictable.

A Little of This, a Lot of That

So you've perfected bourbon chicken and want to impress 12 of your closest friends. Before you grab a calculator and multiply a four-serving recipe by three, eyeball the ingredients. See the spirits and seasonings? When you scale up a recipe, these ingredients don't follow the rules. That's because alcohol can overpower other flavors (so unless you want to serve chicken with a hangover, add it sparingly). According to the editors of Easy Home Cooking Magazine, a double recipe should include only 1.5 times the amount of seasonings the original recipe called for. The same goes for alcohol, baking powder and baking soda.

Of course, scaling a recipe down can be tricky. Say you're stirring up half a recipe of pancakes, that's a game-changer. You can't buy half an egg, so what can you do?

Exceptions to the Rule

There are times when rules are made to be broken -- especially when scaling down a recipe that uses eggs. That's because eggs are not precisely packaged. Sure, they usually come in a relatively uniform shape, but some are larger and contain more liquid than others. So, what's a cook to do? We say crack the egg, mix the yolk and white, and then pour half the mixture into the recipe. Plus, we'll let you in on a secret: If you use the whole egg, even when you need only half, just use a bit less of other liquids. You'll still get tasty results because most recipes, like pancakes, allow for imprecise measurements.

So, to size your favorite recipe up or down, just adjust your ingredient amounts, tweak the cooking temperature and you're sure to have a delicious dish ready for all your guests.

Because of the chemistry involved in baking (how the ingredients interact with one another), super-sizing these recipes can lead to disaster -- especially when it comes to cakes, yeast bread, custard or soufflé. That's because these ingredients need to be in exact proportions to interact properly. Of course, you can still multiply the ingredients to simplify your shopping list. Just remember to mix them in small batches according to the original recipe size when you get back to your kitchen.

Extra 3-D Printed Cheese, Please
How to Cook for 10 People in 60 Minutes
Fondant 101