Go Virgin: Drinks Your Kids Can Say "Cheers" To 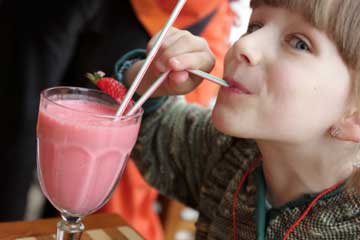 Fixing a mocktail -- a nonalcoholic cocktail -- for children will let them feel like they're part of the festivities. See more pictures of cocktails.
©iStockphoto.com/Arkady Chubykin

When the festivities begin, don't forget the kids or confine them to simple carbonated beverages. Virgin cocktails, kiddie cocktails, mocktails, non-alcoholic drinks -- whatever you want to call them, they're tasty alternatives that pack the flavor wallop of a mixed drink without the alcohol. Children aren't the only potential customers for mocktail mixes, either. Pregnant women, non-drinkers and designated drivers are good candidates for a celebratory virgin drink, too.

This mother of all virgin drinks, the Shirley Temple, is a flavorful blend of ginger ale or carbonated lime soda with grenadine and a maraschino cherry as a finishing touch. It was named for the child actress of the same name and is often attributed to an enterprising bartender at Hollywood's Chasen's Restaurant in the 1930s, although a Hawaiian hotel also claims to have created it. Regardless, the Shirley Temple is a perennial favorite that looks great, with its deep red color, and has a rich taste. Grenadine syrup is made from pomegranate juice, so this little jewel has some healthful benefits going for it, too. You can make a quick version by combining 7 ounces (or 200 milliliters) of soda to 1 ounce of grenadine [source: Miss Charming].

Slightly less well known is the Roy Rogers, a concoction made with grenadine and cola. It's a classic spin on cherry cola that could spoil the canned versions of the drink for you. Whereas a Shirley Temple is the often darling of young girls, the Roy Rogers will probably be a bigger hit with the guys. Instead of ginger ale, use your cola of choice in the proportions listed above.

You can find non-alcoholic alternatives to most mixed drinks. Many of the modifications to the original recipes are flavor enhancers that increase the complexity of the beverage and sometimes add sugars to make up for the absence of alcohol. With a couple of basic ingredients, such as grenadine, you can host a tasting party and even make a signature cocktail of your own.

If you don't have the time or inclination to mix your own non-alcoholic brews, you can find most concoctions, such as margaritas or mojitos, in bottled blends. Although they may be more pricey, they often taste pretty authentic and even look the part, sporting sophisticated packaging that's bound to add credibility to any concoction made with them.

When you're playing bartender, don't forget the extras, such as a stalk of celery for your Virgin Mary, the non-alcoholic alternative to the Bloody Mary, or crushed ice for your margaritas. When it comes to virgin drinks, the details count, so these small touches can make a big difference.

Providing non-alcoholic options that look and taste like familiar bar drinks can be a fun way to celebrate a special occasion or holiday if you take the time to explain to your child the difference between mock cocktails and the real thing. When your child is old enough to drink alcohol, make sure he realizes the implications of his choices and learns to drink responsibly. Until then, muddling some lime and a few mint leaves in the bottom of a glass of crushed ice to make a virgin mojito can be a safe and entertaining way for him to celebrate the holidays with the adults.

Some modern grenadine varieties are made from mostly artificial ingredients, but you can make your own by simmering two parts sugar to one part pomegranate juice until the sugar crystals dissolve. Then just cool and refrigerate.