Can you put tomatoes in the fridge? 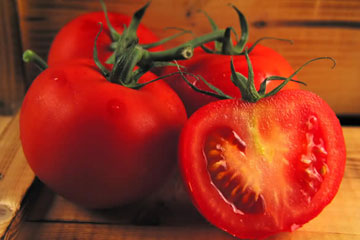 The great tomato storage debate seems to be settled by the label on that little package of Romas that says, "Never Refrigerate." Pretty straightforward. Still, many people do just that and claim no ill effects. So, is the warning valid?

As usual, the answer is: yes and no. But mostly it's yes.

There are at least two schools of thought on the reasoning behind the counter-only storage of tomatoes. The most popular one is scientifically highfalutin and therefore a fun tidbit to share at dinner parties, but it's also quite unproven. This is the one that talks about flavor, and it focuses on volatile aromatics, the chemical compounds responsible for the way a tomato smells.

It is known that these compounds are in fact volatile -- that is, they react easily with other compounds, resulting in a change in chemical structure. The story is that storing a tomato below about 50 or 55 degrees Fahrenheit causes these compounds to degrade, and along with them, the taste of the tomato (because aromatics play a role in taste as well as smell).

The thing is, while heat certainly can result in the degradation of chemical compounds, you'd be hard-pressed to find a study showing that cold has that effect. Scientifically speaking, it doesn't make a ton of sense.

But that doesn't mean you should stick your tomatoes in the fridge. Doing so could definitely leave you with a less delicious fruit, just probably not because of aromatic compounds. More likely, refrigeration's negative effect on the tomato has to do with two different things -- first, there's texture.

Simply put, a tomato that lives in the fridge can turn mealy. It doesn't happen overnight, but it does happen. After, say, three or four days, you can find yourself with a texturally damaged piece of fruit.

The other issue is ripeness. If you bring home a vine-ripened tomato, like one you got at the local farmer's market, and you like your tomatoes cold, you can store it in the fridge for a couple of days without a problem. If you shop at a regular grocery store, though, chances are pretty good that tomato was picked before it fully ripened (it's a shipping-survival thing), so it's going to have to ripen at home -- and that has to be on the counter, not the fridge. Storing an unripe tomato at fridge temperature (usually about 40 degrees Fahrenheit) will prevent it from ripening, and you'll be eating something pretty tasteless in your salad.

In short: Store your tomatoes on the counter.

Unless they're fully ripe and you prefer them cold. Then, feel free to refrigerate for a short time.

Do remember, when you store your tomatoes on the counter, keep them out of direct sunlight, and no matter where they are, store them stem-side-up -- the former will prevent uneven ripening, and the latter will prevent bruising. The flesh around the stem is the tenderest part.

For more information on tomatoes and storing all sorts of fruit, look over the links below. 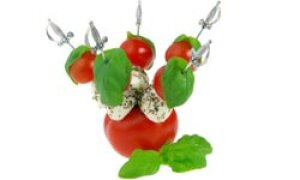 10 Pretty Ways to Use Tomatoes as Garnish 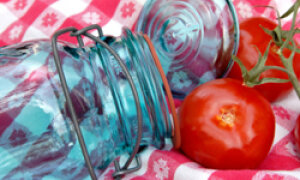