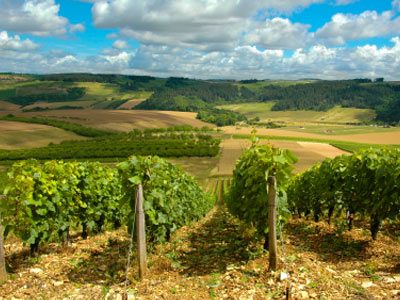 The Champagne region of France is one of the most heavily praised wine regions on Earth. See our collection of wine pictures.­
iStockphoto/Stu Salmon

­It's New Year's Eve. You have your fancy outfit, a date and a party to attend. What's missing? The bubbly! There's nothing like a big bottle of champagne to help you cele­brate.

Most people are familiar with the characteristic bubbles or specific flavor of champagne, but there is so much more to learn about this famous French wine than just what makes it bubbly. It comes from the Champagne region of France, which is one of the most heavily praise­d and restricted wine regions on Earth.

Countries throughout the world use Appellations of Origin to mark their wine territory. The appellation for France is known as Appellation d'Origine Contrôlée (AOC). Wines bearing this label have been subjected to strict rules. There are 35 rules French winemakers must follow, but these are the most important concerning wine produced in the Champagne wine region:

­For centuries, Champagne has been limited to its strict territorial boundaries, but in the early 2000s, the French started realizing it might be time to expand. The global market for champagne is quite large -- it's been hard to manage while picking grapes by hand! The Institut National des Appellations d'Origine (INAO) has approved a tentative plan to increase the ­area where grapes can be grown and still maintain the name Champagne [source: Gaffney]. Needless to say this has caused quite the controversy in the region. It will take years to sort out the logistics, but there's a demand for champagne, and France is trying to meet it.

Read on to learn about the region's history and culture, and find out how the center of Champagne came to be.

How did Champagne become famous? It turns out that monks were t­he first people responsible for producing wine in this region. But in 496 on Christmas Eve, the region of Champagne officially entered into history when Clovis, the king of France, was anointed with sparkling wine by Saint Rémi to celebrate Clovis's conversion to Christianity [source: Le Champagne]. However, the champagne that we know today was actually not invented until the 17th century. According to the French, the invention of champagne, by a monk, is generally attributed to Dom Péringnon [source: Champagneinfo.net].

The region got its major boost after the cathedral in Reims was designated the location for crowning kings from 987 to1825 [source: Le Champagne]. This led to champagne being consumed at all kinds of celebrations. Visiting royalty from other countries were also given the opportunity to taste the royal drink. And so, as the years went by, the legend of champagne wine grew.

In 1882, the champagne houses of France realized they truly had something special. They joined together to form the Union of Champagne Houses, with two objectives: protect the Champagne name and fight against phylloxera (a disease that destroyed grapevines). They called their group l'Union des Maisons de Champagnes (UMC), and it's still active today. The Union is the force behind any lawsuits that are brought against producers of sparkling wines who try to use the Champagne name [source: UMC]. Yes, that's right. Many winemakers of sparkling wine have attempted to use the name Champagne on their labels of sparking wine. But unless it's made in the Champagne region of France, sparkling wine cannot be called champagne.

It can be mesmerizing to watch champagne bubbles. The magical lines shooting out in long strings from the bottom of the glass are beautiful and mysterious. But the magic is quite easy to explain -- it's just carbon dioxide. The bubbles are created during the fermentation process, which is known by winemakers as "the capture of the sparkle" [source: UMC]. ­

The Champagne wine region is locate­d about 90 miles (145 kilom­eters) northeast of Paris [source: wine-pages]. The key to this rich, grape-growing land is chalk. You might think of chalk as that annoying substance that shrieks on chalkboards, but this chalk helps to produce fantastic grapes for winemaking. There are three reasons the chalk is so useful:

There are specific steps involved in caring for Champagne grapes. Growers throughout the region know they must adhere to these standards or they won't be popping any corks in the spring:

Each employee of the vineyard works in sync to carry out these steps to ensure agricultural success.

Champagne flutes are tall, thin and easily knocked over. So why are they used? The tall shape ­provides a better visual of the bubbles as they climb to the rim of the glass. And it's not just about aesthetics -- the bubbles aren't just pretty, they carry aroma and flavor to the top of the glass. [source: Tanasychuk].­

Having trouble deciding on which champagne to choose for that special celebration? Don't worry, you can­ narrow down your choices based on looking for the official Champagne appellation labels from France. Once you find the labels, there are a variety of things to consider before making your selection.

Champagne comes from three types of grapes. Depending on your preferences, you can choose wines based on one of the three main fruits:

Once you have narrowed down the particular flavor you fancy, you can move on to the houses. The Union of Champagne Houses provides a complete list of official houses used to produce its sparkling wines [source: UMC].

If you'd rather just pick up a bottle based on the region's acclaimed champagnes, consider these, which have received international accolades for their excellent qualities:

One of the most difficult aspects of using champagne flutes is washing them. Hand washing can be difficult due to the size of the flutes and the delicate structure, but you might be afraid to wash them in the dishwasher because they might break. The French champagne industry recommends not washing flutes, but simply rinsing them out with warm water and leaving them upside down to dry [source: Le Champagne]. One of the reasons for this is that soap scum left behind can diminish the bubbles in your bubbly.­