by Dave Roos
Next
Cheeses may be categorized by texture, flavor, age, region and a host of other ways. Derek Cooper Photography Inc/Getty Images

Cheese is one of the happiest accidents of food history, likely discovered when an enterprising herdsman decided to store some fresh milk in a pouch made from a sheep's stomach and later opened it to find the liquid transformed into curds of fatty goodness (along with some whey to drink). In ruminant animals like cows and sheep, the fourth stomach is home to rennet, a naturally occurring enzyme that curdles milk, separating it into solid curds and liquid whey.

To make cheese, all you really need are three ingredients: milk, salt and live microbial cultures including rennet. The specific strains of microbes added to the milk play an important role in giving each variety of cheese its distinct flavor. When you mix those three ingredients together, the rennet immediately goes to work curdling the milk. Simply drain off the whey, pack together the curds and you've got cheese!

Well, technically speaking, the process described above is how you would make a fresh cheese like cottage cheese, queso fresco or ricotta. But thanks to centuries of cheesemaking experimentation and innovation, there are dozens of varieties of different cheeses on the market, each with its own unique taste, texture and stink factor.

If you've ever felt overwhelmed by the exhaustive selection of cheese at your local supermarket or cheesemonger, we're here to help.

First, it's important to know that cheese can be classified in any number of different ways. These include:

To keep things simple, we're going to follow the lead of Marcella Wright, certified cheese professional and the popular cheese blogger behind Marcella the Cheesemonger. Wright divides cheese into eight major families (with some cheeses appearing in multiple categories) covering just about every cheese you'll find at a grocery store.

Fresh cheeses are also known as "unripened" cheeses because they aren't aged at all. They are soft, spreadable cheeses with creamy textures and very mild flavors. Like other cheeses, fresh cheeses can be made from different types of milk and varying amounts of salt, which gives them distinct flavors.

The texture of fresh cheese also depends on how much whey and moisture is drained from the final product, resulting in everything from soupy (cottage cheese) to crumbly (queso fresco).

"You can make fresh cheeses on your kitchen counter," says Wright, who makes her own cottage cheese by using lemon juice instead of rennet to curdle the milk.

Some popular fresh cheeses are:

This category refers to the classic Italian stretched-curd cheese preparation made famous in Italy. Pasta Filata is Italian for "spun paste." Fresh cheese curds are steeped in a hot water bath and then stretched, spun or kneaded into different shapes.

Mozzarella is arguably the most famous Pasta Filata. The heating and kneading process aligns the protein structure of the cheese, making it stretch more when melted — perfect for pizza! Spun mozzarella balls can either be stored in brine or water for fresh eating or packed into bricks and aged for a longer shelf life.

Examples of Pasta Filata cheeses are:

Camembert (left) and Brie are both examples of soft-ripened or bloomy rind cheeses.
Image Source/Getty Images

These cheeses ripen from the outside in, so the inside may be runnier than the outside. The best-known soft-ripened cheeses are Brie and Camembert, both from France. The distinguishing characteristic of these creamy, earthy cheeses is a thin white rind of blooming mold. Yup, mold.

During a short aging period, soft-ripened cheeses are exposed to particular strains of mold, like Penicillium camemberti that work from the outside in converting fats into aromatic compounds called ketones. The ketones created by P. camemberti impart a mushroomy, ammonia edge to Camembert.

Wright says that soft-ripened cheese, like all cheese, is best eaten at room temperature when the flavor profile is maximized. If it smells too strongly of ammonia, though, toss it out.

This category focuses on texture rather than the mechanics of how the cheese is made. What semi-soft cheeses share in common is a short aging period, typically only a few months, which results in a moist, flexible cheese with a creamy consistency. Havarti is a classic semi-soft cheese with a very mild flavor.

Examples of semi-soft cheeses are:

Here's where things get exciting. The washed-rind category is responsible for some of the biggest stinkers in the cheese world. The famed (and defamed) Limburger cheese packs a powerful aroma reminiscent of old sneakers, and that's not a coincidence.

The stinkiest washed-rind cheeses are rinsed down twice a week with seawater, beer, wine or liquor for about two months. Why wash the rind? Wright says the practice began with monks who wanted to keep mold from growing on their cheese. By washing it with brine or beer, they not only killed the mold, but promoted the growth of a bacteria called Brevibacterium linens.

B. linens, it turns out, is also one of the main bacteria found on unwashed feet. But don't be scared off by Limburger and other stinky rind-washed cheeses.

"Their bark is worse than their bite," says Wright. "They're much more approachable if you can get past the smell."

This is a fun category. Anybody who's seen the spidery blue veins of a ripe Roquefort or Stilton cheese has wondered, where does that weird blue stuff come from? The answer, again, is mold.

While soft-ripened cheeses like Brie are externally treated with mold, blue cheeses are inoculated with mold internally. The particular strains of mold that make blue-streaked cheese include Penicillium roqueforti, named for a mold common to caves in the region of Roquefort, France.

Interestingly, the blue mold will only grow when exposed to air. When blue cheeses are first pressed into molds, they have pristine white interiors. But at some point in the aging process, the cheesemakers pierce the skin of the wheel, introducing air, which kick-starts the mold-growing process.

Blue cheeses have strong, salty, nutty flavors and include varieties like:

Cheddar is a classic semi-hard cheese, which is by far the largest category of cheeses on the market. Semi-hard cheeses get their flavor from two sources: the strain of bacteria introduced to the milk and how long the particular cheese is aged.

Fun fact: Cheese is fermented. When bacteria are added to milk, they go to work converting natural sugars in the milk (lactose) into lactic acid. That lactic acid is part of what gives cheese its distinctive tang. Other bacteria contribute to the formation of complex flavor proteins. Still other bacteria burp up carbon dioxide gas, which creates the telltale holes of Swiss cheese.

Different strains of bacteria are used as "starter cultures" to produce different varieties of cheese. A strain called Lactococcus lactis ssp. cremoris is the bacteria behind cheddar. Lactobacillus helveticus will give you Swiss.

Then there's aging. With semi-hard cheeses, the length of the aging process will determine the hardness of the cheese and the "sharpness" of its flavor profile. That's because cheese loses moisture as it ages, hardening the cheese and amplifying the natural flavor of the proteins created by the bacterial cultures.

This category is reserved for extra-hard, extremely low-moisture cheeses like Parmesan, Machego and Asiago. These cheeses are characterized by their pungent saltiness and rich umami flavor profile. Because of their hardness, these cheeses are often grated over dishes like pasta and soup, not sliced.

Parmesan is a generic name for the original Parmigiano-Reggiano from Italy. To make this classic cheese, large wheels of freshly curdled milk are first soaked in a salt bath for three months, then aged for at least 24 months, but up to three years. The cheese forms a thick natural rind that's hard on the teeth but is a great addition to soups and stocks.

If you notice little crunchy bits in a well-aged, hard cheese, don't fret. Those aren't hunks of salt, says Wright, but cheese crystals that form as a natural byproduct of the slow-aging process. The crystals themselves don't impart any flavor, but they are a sign that bacteria are doing their work breaking down the lactose and amino acids in the cheese, which will result in a more robust flavor.

As any self-respecting cheese-lover will tell you, processed cheese products like Velveeta and Kraft Singles are not cheese. These products contain many of the elements of cheese — milk, milkfat, whey protein, salt, lactic acid — but they are not the result of a traditional cheesemaking process or anything resembling it.

And then there are other processed cheeses that contain some amount of real cheese plus additives that improve the product's meltability and shelf life. Wright is not impressed by any product that has "made with real cheese" on its package.

"If the first ingredient in a cheese product is cheese, then it's not cheese," she says.

Feta cheese is a fresh cheese made from sheep's or goat's milk that's brined for at least three months to give it its salty, pickled kick. 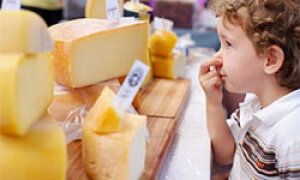 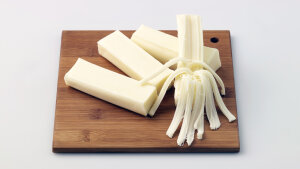 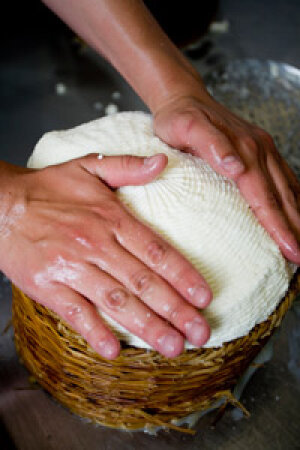 How to Make Cheese