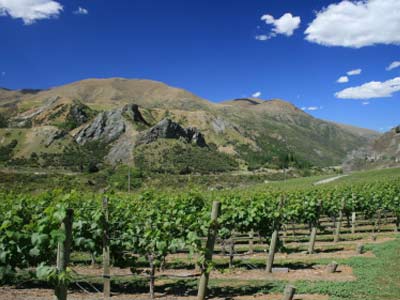 The Marlborough region is the leading wine-producing area in New Zealand. See our collection of wine pictures.
iStockphoto.com/Mark Senior

­A truly successful wine must have its own flav­or, its own character. It must be distinctive in style, taste and aroma -- after all, dozens of regions produce the same types of wine, their own Cabernets, their own Merlots, their own Chardonnays, their own Rieslings. So what, then, makes one wine so much better over its counterpart in a different region? You'd probably guess that an area with a long history of winemaking would be the winner. After all, experience counts. However, you'd be hard-pressed to explain the overwhelming popularity and success of the Marlborough Sauvignon Blanc.

The Marlborough wine region, located on the eastern coast of New Zealand's South Island, is the leading wine producer in the country, but it's been making wines only within the last half-century. And it wasn't until the mid-1970s that the Sauvignon Blanc grape, for which the region has received worldwide acclaim, was even planted [source: Apstein].

­Luckily for Marlborough, the region seems to have the exact climate that the Sauvignon Blanc grape loves. Somehow, a perfect storm is created and these grapes have a bold, zingy flavor (called piercing, thrilling and electrifying by various critics) that wine lovers can't get enough of. It's so good that even the French -- who have been at this a lot longer than the Kiwis -- ar­e trying to copy them [source: Quaffers]. It's all pretty impressive for a region that's only been at this for about 30 years.

So how did a small New Zealand region that had no interest in winemaking 50 years ago become the leader of its country's wine production? How did this wine become the envy of its competitors? In this article you'll learn the key as you discover the history, culture and agriculture of the Marlborough wine region, as well as the other wines of the region that respectfully hold their own.

Let's start at the beginning by learning about the Marlborough region's short but sweet winemaking history.

Distinct contrast is the key when discussing the Marlborough wine region's agriculture, in both the soil and the climate. With the mountains to the west and water to the east, the area gets a lot of sun. How much? The town of Blenheim has the most sunshine of any place in New Zealand, coupled with low average rainfalls [source: Wine Marlborough]. The warm, sunny summer days -- with a pleasant seasonal average temperature of 75 degrees Fahrenheit (25 degrees Celsius) -- give way to cool nights. This day/night contrast makes a perfect environment for the grapes. It enhances the grapes' acidity and flavors and gives them better color [source: Discover Marlborough].

The soils of the Wairau Plain and Awatere Valley are traditionally poor for growing. They aren't very fertile and are full of stones and sand [source: Wine Marlborough]. However, one person's trash is another person's -- or in this case, grape's -- treasure. This quickly draining, shallow soil is ideal for grapes and their vines, which thrive in growing conditions that would cause many other plants to wither.

Meanwhile, in Kaikoura, the area near the coast, the soils are much more chalky and full of sandy limestone from the sea. It's a bit cooler here, but the area gets a tad more sun than the Wairau Plain or Awatere Valley, allowing the grapes to ripen slowly and evenly [source: Discover Marlborough].

Read on to discover what kinds of wine are popular in New Zealand's leading wine-producing region.

Sustainable Winegrowing New Zealand (SWNZ) focuses on promoting green, economically friendly and viable growing practices -- in other words, sustainability in winemaking. New Zealand’s beautiful landscape hasn’t been spoiled by winemaking, and though the country’s vintners seek popularity in the wine world, they are refusing to give up their land’s natural beauty to do so. That kind of fame would cost an unacceptable price. SWNZ is leading the country’s efforts to emphasize sustainable winemaking, and hundreds of vineyards and wineries in New Zealand are participating in the effort. In Marlborough alone, a whopping 261 vineyards are accredited by SWNZ [source: NZ Wine]. ­

In some regions, one wine is the clear leader. Other areas produce seemingly everything and anything, making it tough to pick a winner. New Zealand's Marlborough wine region falls somewhere in between. There are about five quality wines within the region, so you have a few to choose from. However, Sauvignon Blanc is the definite winner here -- it takes up 65 percent of the region's production and is inarguably the cause for Marlborough's leadership and fame in New Zealand's wine production: Sauvignon Blanc [source: Wine Marlborough].

The Sauvignon Blanc of Marlborough is easily characterized by its distinctive qualities, which make it a bit unlike any other Sauvignon Blanc you might find from another country or region. It's known as having "a piercing citric quality and electrifying edge" [source: Apstein]. This white wine doesn't need to be aged -- in fact, its intensity is best enjoyed right after production, as aging can dull what makes it unique. That's why many wineries in Marlborough use screw caps instead of corks. This increasingly popular technique is often used with the region's Sauvignon Blanc -- a cork could change its flavor and cause it to lose its forceful, bold flavors.

This late-bloomer winemaking region is quickly taking the wine world by storm. If you like an in-your-face wine, you'll certainly want to check out Marlborough's famed Sauvignon Blanc.

Marlborough’s Sauvignon Blanc has been planted in the region only within the past 30 years, yet it quickly ruled the country. Some argue that the Marlborough Sauvignon Blanc is so unique and delicious that is possibly the best in the world. Is it really that good? Who knows, but it might not be that much of a stretch: some French vineyards are attempting to make their Sauvignon Blancs more like Marlborough’s [source: Quaffers]. Now that’s a compliment. ­