Browse the article Ultimate Guide to the Northland Wine Region 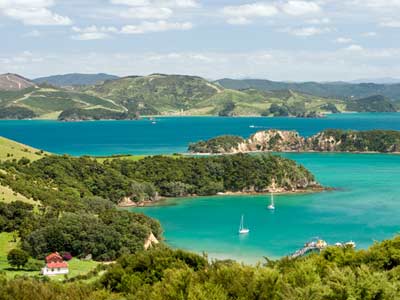 The country of New Zealand -- and its wine industry -- was born in the Northland region. See more wine pictures.­
Michele Westmorland/Photodisc/Getty Images

Northland, the northernmost tip of New Zealand's North Island, is often called "the birthplace of a nation." Not only is it the first place where the Maori came to New Zealand, but it's also where the Maori and the British formalized their accord for joint settlement of the island. For wine lovers, Northland is important because of another first: the introduction of vines to New Zealand soil.

For several centuries, the traits that make Northland a jaw-droppingly beautiful place prevented viniculture from taking off in earnest. Northland has the world's largest remaining ancient forests, with the awe-inspiring kauri trees, which stand in subtropical rain forests. But "subtropical rain forest" is not the clim­ate one typically finds in a wine region. So Northland viniculturists have had to overcome several challenges in pursuit of the perfect red.

This article looks first at the history of New Zealand's oldest region, and then we'll take a tour of Northland's agriculture and the wines it produces.

Humans arrived in Northland roughly a thousand years ago, when the Maori explorer Kupe landed at Hokianga. Kupe is still celebrated today -- many contemporary Maori iwi, or tribes, trace their origins back to him.

In the 18th century, following the expedition of Captain James Cook, European settlers began to arrive. Some were pursuing the whale and seal trades. Some wanted to harvest kauri trees and gum. Others had higher aims -- they were missionaries. All of them brought guns an­d disease -- major threats to Maori society.

Several major waves of immigration came to Northland in the 19th century -- from Nova Scotia, Ireland, Wales, the Dalmatian coast and Britain. You can still pick out Scottish and Croatian names among the Maori and English place names around the country.

The arrival of so many different groups created conflict, as it has in similar situations around the world. The Bay of Islands was once called the "hellhole of the Pacific" [source: 100% Pure New Zealand].

In 1840, the Treaty of Waitangi marked a turning point: a formal arrangement between the Maori and the British Crown. It came to serve as the founding document of the New Zealand government, and the place where it was signed remains a historic park.

For a few decades, however, the treaty had the opposite of its intended effect: It led the Maori to recognize the colonists as a grave threat to Maori culture and land. (Many Maori believe that, in lieu of ownership, each generation holds the land in trust for the next.) In response to the threat, some chieftains began conducting raids and other guerrilla attacks against British settlements, touching off the Maori Wars. Fighting lasted until 1872.

Twentieth-century urbanization integrated the two cultures with relative thoroughness. Although some problems of inequality persist, they are less pronounced than in many other former colonial areas. Active movements to preserve Maori culture and language have resulted in a strong contemporary Maori identity.

Today Northland's population numbers in the hundreds of thousands. But some areas still belong to nature. There are no high-rise buildings or traffic lights -- anywhere -- north of Whangarai. Perhaps it's no coincidence that this area also contains most of Northland's vineyards. For a look at their growing methods, read on.

About a third of New Zealand’s population is Maori [source: New Zealand Tourism Guide]. Maori claim membership in their iwi (tribe), but not in any larger Maori “nation,” as some other tribal groups do. The groups that matter are iwi and the smaller family groups, whanau and hapu [source: Enterprise Northland].­

New Zealand's thriving wine industry began in Northland [source: Wine Searcher]. The first grapes were planted in 1819 by missionary James Marsden, but industrial viniculture is relatively recent here -- it didn't start in earnest until the 1990s. Northland remains the smallest of the New Zealand wine regions, with viniculture concentrated in just three areas: Kaitaia, the Bay of Islands, and near Whangarei.

In several ways, New Zealand's viniculture defies conventional wisdom. Many wine regions experience large temperature variations between night and day. The hot days and cool nights of Spain, for example, help give local grapes such as the Mencía their distinctive flavor. Not so in Northland. High humidity helps the air retain heat, so once the temperature is warm, it stays warm.

However, Northland's humidity and generally wet climate mean that growers here must be careful about rot. Recently growers have begun to experiment with rot-resistant strains of red grapes. The best solution, for now, seems to be to focus on thicker-skinned grapes -- such as Syrah, Cabernet and Pinotage -- which have more natural defenses against mold [source: Northland Wine Company].

Merlot and Syrah grapes also fare well here because of the long growing season. Northland has virtually no frost, ever. It's nearly tropical. In fact, it usually has New Zealand's warmest growing season. The grapes can stay on the vine for a long, warm time, allowing the crucial sugars to accumulate.

Some soil in the Northland region is volcanic -- highly mineral and well-drained. Elsewhere it has high concentrations of clay or sandy clay. Most vines are grown on flats or gentle slopes, not the steep hillsides you encounter in many other wine regions.

How does all this warmth play out in the bottle? Find out on the next page.

One Northland vineyard, Longview Estate, attracts as much attention for its scarecrows as for its wine. What’s so special about the scarecrows? Longview forgoes the traditional “old clothes stuffed with straw” approach, in favor of inflatable sex dolls in bikinis. The dolls do seem to keep the crows away -- although, fortunately for Longview, they have the opposite effect on passing tourists [sources: Courtney, Longview].­

Many New Zealand wineries are relatively small -- but that means there's lots of room for individualism, interesting experiments and a sense of humor. The region's standout grape -- but by no means its only one -- is the Syrah.

Marsden Estate bears the name of the area's first viniculturist, and it's appropriately prominent. Marsden's Black Rocks Chardonnay has won numerous gold medals, and its Pinot Gris is worth a taste. Marsden's main red is Syrah, but Pinotage and Cabernet Merlot are also important, and the Chambourcin is gaining ground. Marsden also produces a port.

Okahu Estate's Chardonnay is notable, and Okahu's Kaz Shiraz, a Syrah, won the first gold medal ever given to a Northland wine. Like many Syrahs of New Zealand, it contains notes of berries and pepper.

Cottle Hill produces a variety of reds and whites, including some unusual flavors. Among the standouts are Pinot Noir, Pinot Noir Rose, Merlot, the blend Pheasant's Walk, the Muscat Bay Breeze, Chardonnay and Sauvignon Blanc. Other favorites include a tawny port, a rare white port and a Federweisser, a young wine for Easter (which is an autumn holiday in the southern hemisphere).

Karikari (formerly Carrington) Estate offers Bordeaux-style reds as well as Syrah, Viogner, Pinotage and Chardonnay. Karikari maintains several labels, some of which import grapes from other estates. The Silver Bay and Carricon labels use some grapes from elsewhere in New Zealand, but the Karikari label keeps it local.

Omata Estate is known for its Syrah, but it also produces a Merlot, a Chardonnay and a dessert Chardonnay. Northland Wine Company produces Rhone styles, particularly Syrah and Viogner. The Chambourcin from Ake Ake, the youngest vineyard in Northland, also deserves a mention. Ake Ake has been around only since 2006 -- this is an up-and-comer to watch.

In New Zealand, the tradition of the hongi -- a Maori greeting exchanged by pressing noses together -- is still alive and well. But why not give your nose a full workout? Come tour the wineries of Northland.

Northland’s Doubtless Bay got its name -- inadvertently -- from Captain James Cook, who noted that the inlet he saw from a distance was “doubtless a bay.” Today the site is home to an experimental vineyard, where growers plant different varietals and clones in the volcanic soil in an effort to, well, doubt less about what is best suited to this unusual place [source: Doubtless].­