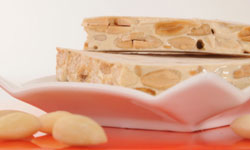 The fluffy stuff in candy bars is a far cry from the real thing. See more pictures of candy.
iStockphoto/Thinkstock

Many candy bar aficionados and general lovers of sweets have seen it advertised on their favorite wrappers and asked the question: What is nougat, anyway? The short answer is that it's a type of candy made from honey, sugar, nuts and often egg whites.

Nougat is also the sticky stuff that gets caught in your teeth whenever you eat a Snickers, Baby Ruth, Milky Way or 3 Musketeers bar, though the ingredients aren't the same. All-natural nougat is a far different and much more flavorful treat than the corn syrupy, preservative-laden candy bar component with which most of us are familiar. 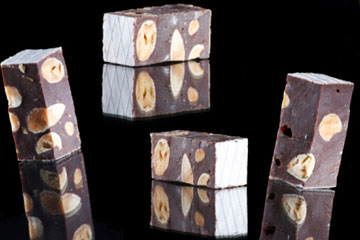 Nougat, in one form or another, has been around for quite sometime. It first gained widespread popularity in 17th century-France, though many scholars believe its origins can be dated back several centuries or even millennia before that time.

The Italians refer to nougat as torrone, and it's known as turrón in Spain. Nougat is generally considered a French treat (it's a French word descended from the Latin term for nut) and can be found in white and brown variations.

White nougat is made by adding honey, sugar and nuts to thoroughly beaten egg whites. It's soft and sweet with a denser body and more potent flavor than the synthetic nougat found in candy bars. Brown nougat contains no egg product and relies on honey or caramelized sugar for its base, which gives it a darker color. This kind of nougat is more brittle than its lighter cousin. Dried fruit and chocolate can be found in either variety of nougat, though the confection is often enjoyed on its own.

Because nougat contains so few ingredients, it's easy to redefine its flavor by making a few minor changes. White nougat containing pistachios, for example, will affect your taste buds differently than a version made with almonds. Of course, the principal ingredients remain the same, so it's not going to be a radically dissimilar experience, but a little change can go a long way. Consider the differences found in a box of assorted chocolate candies to get an idea of what we're talking about. 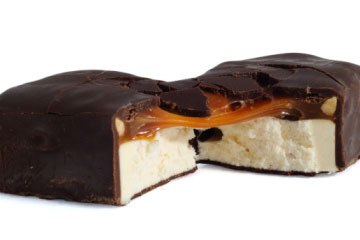 The nougat in that candy bar is made from more shelf-stable ingredients.
Hemera/Thinkstock

The taste of homemade nougat may be easy to manipulate, but you better hurry up and eat it: This confection isn't built to last! Like most dishes made from all-natural ingredients, nougat tends spoil quickly -- particularly the lighter-colored variety. Even if your sugary treat doesn't go bad, the ingredients won't stay blended indefinitely. So it's not surprising that the nougat in mass-produced candy bars bears little resemblance to its homemade, all-natural counterpart.

Snickers bars are billed as containing nougat, but you're not going to find it in the ingredients list (as you will milk chocolate). Instead, you have to search through the list of 19 ingredients to find nougat-related elements. Sugar, corn syrup and nuts are all there, as are egg whites, though they're second to last on the list. What does this mean? You're getting significantly more soy lecithin, artificial flavoring and partially hydrogenated soybean oil than nougat.

Some candy bar wrappers specify what type of nougat you'll find inside, though white or brown is rarely noted. Regular Milky Way bars, for example, use malt-flavored nougat, while Milky Way Midnight's nougat is vanilla-flavored. Baby Ruth bars, on the other hand, contain thick, chocolaty nougat, but the manufacturers don't give away the particular flavor.

All these varying tastes, textures and brands make nougat extremely hard to classify. There's a definite similarity between the taste of homemade, all-natural nougat and what you'll find inside a candy bar, but it's difficult to describe. The natural stuff is fuller and more flavorful, and many people find nougat-infused candy bars lacking if they've ever had the real thing, but it's really all just a matter of, well, taste.