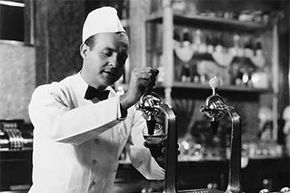 Back in the day, the smiling soda jerk did by hand what a fountain machine does -- but with more finesse.
Petrified Collection/The Image Bank/Getty Images

Cold marble countertops, swiveling leather stools and pink neon signs. A boy and a girl smile shyly as they share a fizzy-sweet treat through two long straws. Behind the counter, a teenage soda "jerk" in his trademark black bowtie and crisp white paper cap pulls bubbling carbonated water into tall chilled glasses, then blends in flavored syrups to create drug store favorites like phosphates and egg creams (no egg, no cream, lots of chocolate).

This is the classic American soda fountain experience of the 1940s. At the center of it is the fountain itself. Back in the late 19th century, the grandest soda fountains boasted long rows of silver gooseneck spigots dispensing pure carbonated water that could be hand-mixed with more than 100 flavored syrups, many derived from natural fruits, herbs and pungent roots: birch, lemon, ginger, cherry, pomegranate, gooseberry, nutmeg, grape, vanilla, peppermint and rose.

Today, the closest things to a soda fountain that most of us recognize are the familiar self-serve beverage machines in every fast-food restaurant and cafeteria. Instead of dispensing carbonated water and syrup separately to be mixed by hand, modern soda fountains are programmed to dispense a precise amount of fizzy water with sugary flavoring to achieve the patented taste of Coke, Sprite, Dr. Pepper, Mountain Dew and dozens more multinational brands.

With health concerns over the high sugar content of most commercial soft drinks, many people are opting to make their own sodas at home. The DIY soda boom is fueled by the popularity of the soda makers, affordable countertop appliances that can turn ordinary tap water into bubbling seltzer in seconds. Adventurous consumers can brew up their own pop concoctions using flavors provided by the manufacturers or whatever concoctions they like.

The public appetite for fizzy drinks started with spa-goers drinking water from naturally bubbling springs, which were thought to have curative powers. But the mass production of soda only started after people figured out how to make carbonated water in a machine. And that was harder to do than you'd think.

The Science of Soda 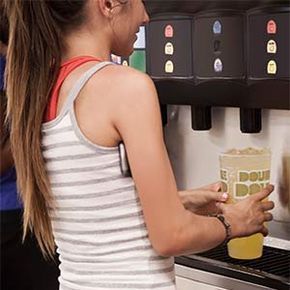 The ratio of soda water to syrup should be about five to one. Otherwise, you risk making a tasteless drink.
Moxie Productions/Getty Images

Soda fountains are really nothing more than machines that dispense carbonated water that's flavored with a sticky-sweet syrup. But how do you make that water bubble?

Carbonated water is regular water that's been supersaturated with carbon dioxide (C02) gas. Although it sounds easy enough, it took centuries for scientists and inventors to master the chemistry and engineer the technology to infuse air bubbles into ordinary water. The challenge to mixing CO2 with H2O is that the shapes of their individual molecules make it almost impossible for the two substances to bond [source: Discovery].

The two secret ingredients to making carbonated water, it turns out, are pressure and temperature. If carbon dioxide is mixed with very cold water in a sealed, high-pressure environment, the elements will successfully combine. The first man to invent such a pressurized carbonation system was Johann Jacob Schweppe, a Swiss scientist who developed a hand-cranked compression pump back in 1783 and whose name still graces bottles of fizzy ginger ale and club soda [source: Oatman-Stanford].

The scientific process of carbonation requires water and carbon dioxide to be pressurized in a sealed chamber to seven times the normal atmospheric pressure. At that point, individual molecules of C02 begin to separate and surround themselves with water molecules [source: Discovery]. Under those extreme conditions, the gas fully dissolves in the liquid.

Inside the pressure chamber, carbonated water has absolutely no fizz. The bubbles only emerge when the liquid is released from the chamber back into normal atmospheric pressure. Carbonated water contains 16,000 times more C02than regular water, roughly five "glasses" of C02 for every glass of water [source: Discovery]. When you pop the cap on a soda bottle, the release of pressure causes all of those dissolved C02 molecules to become gas again and rush to escape through the surface of the liquid as bubbles.

Soda Fountains, Then and Now

Over the past 200 years, soda fountains have evolved from giant, room-sized machines run by teams of men to countertop devices that prepare and dispense tongue-tickling beverages in seconds.

Matthews knew that you could produce C02 by combining sulfuric acid with pulverized marble dust, which is rich in calcium carbonate. He built a sealed cast-iron boxed lined with lead and filled it with a precise blend of acid and crushed marble. The carbon dioxide generated by the chemical reaction would rise through a water chamber for purification and into a pressurized carbonation tank containing cold spring water [source: Yates].

In the early days, subterranean workers in Matthews' New York soda fountains would manually shake the tanks of spring water for a half-hour to fully carbonate the liquid, which would then be piped to the taproom at street level above [source: Yates].

Contrast the primitive technology of those first soda fountains with the self-serve units found in most fast-food restaurants. Inside these tabletop machines, which can serve eight or more flavors of soft drink at once, is a pressurized C02 tank, a water pump and a carbonator. The C02 tank and the water pump send pressurized gas and cold water into the carbonator where the C02 dissolves completely.

When the soda dispenser tab is pressed, carbonated water is released from the carbonator. At the same time, a second pump sends a squeeze of flavored syrup from one of several name-brand bags loaded into the unit. The ratio of water to syrup is roughly five to one [source: Carbonics]. The cocktail of carbonated water and syrup is blended right at the dispenser head as the product hits the cup.

Between the creation of the technology for aerated water and the modern soda fountain, which is basically a stand in a restaurant where you serve yourself a drink, was a time when you got your soda from pharmacists who served up "medicinal" concoctions with a spoonful of sugar and lots of refreshing fizz. 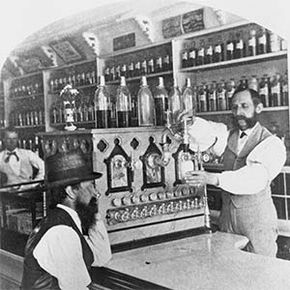 At this small-town soda fountain in the 1890s, a pharmacist whips up a fizzy concoction for a customer.
© Corbis

Imagine what life would have been like in New York City, Philadelphia or Atlanta, back in the summer of 1892. Cities were stiflingly hot, and there was no such thing as air conditioning or refrigeration. Men wore suits and women walked around in long dresses with layers of constricting undergarments. It must have been unbearable.

Then imagine stepping from the sun-baked street into a dark, cool establishment. Behind an ornate marble bar stand mustachioed men in white pharmacist coats and starched collars mixing up the most enticing and refreshing beverages. You order a Coca-Cola, the latest and greatest miracle drink, promising instant energy and relief from upset stomach and headaches.

Now imagine that first sip — so wonderfully cold, buzzing with bubbles, nearly electric with sweet and exotic flavors. Your thirst sated and your spirits revived, you're almost ready to brave the summer heat. After one more soda.

The first American soda fountain was likely built in New York City in 1809 by a Yale chemistry professor by the wonderful name of Benjamin Silliman [source: Oatman-Stanford]. Like many early soda fountains, Silliman's sold customers on the purported health benefits of carbonated water. Flavors like ginger and lemon were subdued and marketed as natural remedies.

Then the pharmacists took over. By the mid-19th century, the pharmacy counter was the hot spot for the latest and most creative soda flavors. Before the advent of a highly regulated, commercialized drug industry, each pharmacist was free to mix up his own fizzy-sweet cocktails spiked with such spirit-lifting wonder drugs as caffeine, kola nuts and even cocaine! Yup, in the late 1800s, cocaine was a common ingredient in so-called "bracers" or "nervines" intended to deliver extra pep [source: Oatman-Stanford].

But not everyone crowding into 1890s soda fountains was a speed fiend. Hugely popular refreshments included the original milkshake (carbonated water, sweetened flavored milk and a raw egg!) and the ice cream soda, flavored soda water with a scoop of vanilla ice cream [source: Cooper Funderberg].

The 19th-century temperance movement also fueled the popularity of the soda fountain as a wholesome and healthy alternative to the saloon. By the turn of the 20th century, every major city in America had thousands of corner drug stores serving up refreshing drinks at the glorious soda fountain [source: Cooper Funderberg].

The decline of soda fountains, starting in the 1930s, has been blamed on many things: the rise of car culture and drive-through restaurants; the ubiquity of home refrigeration; even the end of Prohibition. By the 1970s you could barely find a soda fountain. But a few old-time diners have survived the decades, and some new soda fountains have popped up in the 21st century, deliberately reproducing the feel of bygone eras [source: Moskin].

When I was in college, there was an old-fashioned drug store on the main drag in town that had been in continuous operation since 1922. By the time we arrived in the 1990s, the place was a shadow of its former glory, mostly dispensing prescriptions selling orthopedic shoes for local folks old enough to remember the scene at the now empty soda fountain. The only thing they still served up was a mean chocolate milkshake made with whole milk and generous scoops of ice cream. As tasty as it was, it made me lament growing up in an era when the soda fountain had been stomped nearly to extinction by fast-food chains and premade treats. I'm excited to see the resurgence of classic soda fountains all across America, and particularly the pride these new establishments take in their homemade, often artisanal ingredients and methods. Maybe it's time to get out and try one of those mysterious egg creams. 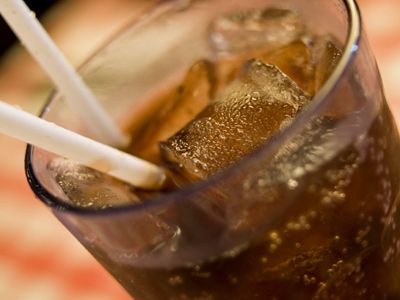 Up Next
The History of Cola
Explore More 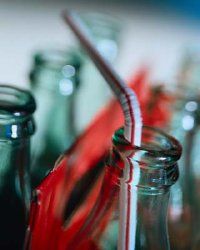 You May Like
17 Obscure Brands of Soda Pop
Explore More 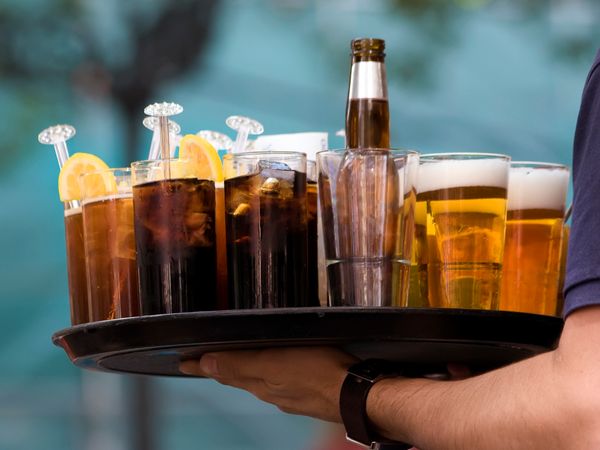 Keep Reading
Why does beer form a head but soda doesn't?
Explore More