The Science of Soda 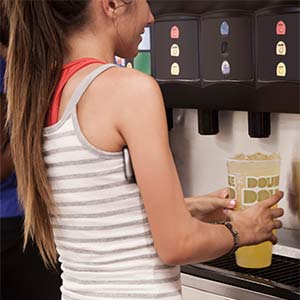 The ratio of soda water to syrup should be about five to one. Otherwise, you risk making a tasteless drink.
Moxie Productions/Getty Images

Soda fountains are really nothing more than machines that dispense carbonated water that's flavored with a sticky-sweet syrup. But how do you make that water bubble?

Carbonated water is regular water that's been supersaturated with carbon dioxide (C02) gas. Although it sounds easy enough, it took centuries for scientists and inventors to master the chemistry and engineer the technology to infuse air bubbles into ordinary water. The challenge to mixing CO2 with H2O is that the shapes of their individual molecules make it almost impossible for the two substances to bond [source: Discovery].

The two secret ingredients to making carbonated water, it turns out, are pressure and temperature. If carbon dioxide is mixed with very cold water in a sealed, high-pressure environment, the elements will successfully combine. The first man to invent such a pressurized carbonation system was Johann Jacob Schweppe, a Swiss scientist who developed a hand-cranked compression pump back in 1783 and whose name still graces bottles of fizzy ginger ale and club soda [source: Oatman-Stanford].

The scientific process of carbonation requires water and carbon dioxide to be pressurized in a sealed chamber to seven times the normal atmospheric pressure. At that point, individual molecules of C02 begin to separate and surround themselves with water molecules [source: Discovery]. Under those extreme conditions, the gas fully dissolves in the liquid.

Inside the pressure chamber, carbonated water has absolutely no fizz. The bubbles only emerge when the liquid is released from the chamber back into normal atmospheric pressure. Carbonated water contains 16,000 times more C02than regular water, roughly five "glasses" of C02 for every glass of water [source: Discovery]. When you pop the cap on a soda bottle, the release of pressure causes all of those dissolved C02 molecules to become gas again and rush to escape through the surface of the liquid as bubbles.