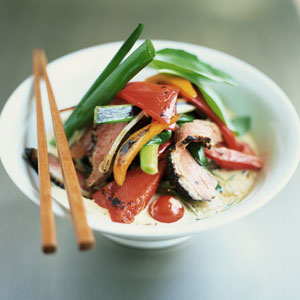 Perhaps the most impressive and unique trait of Thai food is the balance of its flavors. The majority of Thailand's population is Buddhist, and the religion has had a profound influence on the national cuisine. Every Thai meal seeks a harmony with its flavors, and that balance is not just limited to sweet/sour and spicy/salty combinations. The four flavors work together to balance one another out, allowing your taste buds to appreciate all the elements of the meal --- not be overridden by one or two prominent tastes.

What Makes a Thai Meal?

A Thai meal generally consists of soup or salad, a main course, a dip and a side or two. The portions are pretty small. The global popularity of Thai cooking has exploded over the past three decades, in part because of the forgiving nature of its recipes [source: Owen]. Most Thai dishes are relatively easy to cook, but their preparation is in no way an exact science. Measuring cups are unimportant, and recipes are more of a guide than a set of instructions. Estimations, changing ingredients -- it's all pretty much guided by your tongue. If you want to add more garlic -- add more garlic! If you feel that a recipe calls for too much fish oil -- hold back on it. Don't be afraid to tailor your cooking to suit your tastes.

In order to achieve the necessary balance, there are several quintessential ingredients that are found in virtually every Thai meal. They are:

If you're looking for some easy Thai recipes, try Pad Thai, Thai fried rice or Thai noodle soup. These meals are simple to make and offer a tantalizing, tasty glimpse into Thai cuisine.

Did You Know? Jasmine rice is the most common form of rice used in Thai recipes -- and it's grown exclusively in Thailand. When jasmine rice is cooked, it doesn't swell like traditional white rice; instead, it expands horizontally, becoming longer instead of fatter. It's got a unique, popcornlike smell and an unusual, nutty flavor.