How to Use an Ice Cream Maker 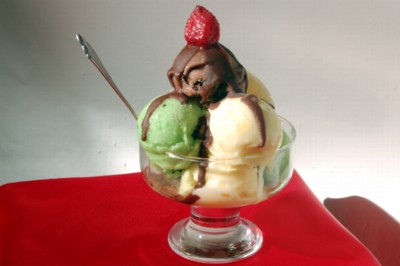 There are two basic types of ice cream makers available on the market -- manual and electric.
Ehsan Namavar

A. Making ice cream at home conjures a picture of a 1950s, Mayberry era when everyone took a turn cranking a machine that looked like a wooden bucket with a handle sticking out of it. Those rudimentary ice cream makers are still around and can be fun in a retro way, but most of us are looking for something a little less aerobic-intensive.

Today, ice cream makers for the home kitchen come in two basic types: manual and electric. They can be as simple as the Mayberry bucket, or they can have bells and whistles that do everything for you. Prices range from less than $50 on up, depending on how many bells and whistles you want.

All work on about the same principle: A paddle, called a dasher, fits inside a canister that holds the ice cream mixture. The canister fits inside a container that holds the freezing agent: ice and salt, an electric refrigerating unit, or a chemical coolant that's sealed inside the container walls. (This is sometimes called a "freezer bowl" and requires 24 to 48 hours in your freezer before it is cold enough to make ice cream.) The dasher stirs the ice cream mixture as it freezes to keep it smooth and aerated -- without air, ice cream would be brick-solid -- and to keep ice crystals from forming and ruining the taste and texture.

Manual machines require people-power to keep the dasher turning. Some require ice and rock salt, which lowers the temperature of the ice, in the container that holds the canister; these machines need to be cranked manually for 30 to 40 minutes to make four to six quarts of ice cream. The type with freezer bowls only needs to be cranked once every two or three minutes for 15 to 30 minutes.

The most common electric ice cream maker uses ice and table salt to line the canister, and the motor turns the canister. Larger units have electric freezer units and automatic dashers, so you just pour in the ice cream mixture and turn it on.

One popular stand mixer brand has an ice cream maker attachment: a rotating dasher, and insulated freezer bowl that can make two quarts of ice cream in about 20 to 30 minutes.

No ice, no rock salt, no aerobic crank­ing…it looks like Mayberry has entered the 21st century.

One of the most popular small kitchen appliances, the food processor, is discussed on the next page. Keep reading to find out how to use a food processor.