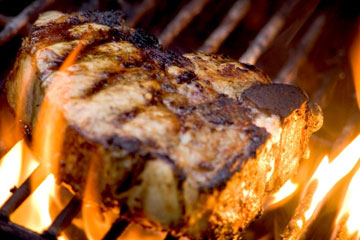 Grilling may not be to quickest way to cook pork chops, but it's arguably the most delicious. See more easy weeknight meal pictures.
iStockphoto/Thinkstock

When you're sick of chicken and red meat just doesn't seem appetizing, perhaps you should consider pork chops for your mealtime main course! Succulent and flavorful by nature, pork chops are a healthy meat choice that can be prepared pretty much any way you can imagine. You can bake, grill, fry, broil, microwave or pop them in the slow cooker. Obviously, a crock pot is going to be the slowest cooking method, so what's the fastest?

One thing to consider is that the thickness of the cut directly impacts the time it takes your chops to cook. Therefore, it's important to compare cuts of equal thickness when analyzing cooking methods. For example, a thinly sliced pork chop cooked on the grill is going to be ready to eat faster than a thicker chop heated the same way.

Overall, pan-frying with a little bit of cooking oil is probably the quickest method for preparing pork chops. Typically, when done over medium heat in a skillet, chops require anywhere from 2 to 10 minutes per side to cook. Chops closer to a half-inch in thickness will be on the lower end of the cooking timetable; thicker versions will take longer. Be sure not to stray too far from the stovetop, however. It's frighteningly easy to go from golden brown to blackened in short order.

If you really need to speed up the process, try butterflying the chops. To achieve this easy technique, simply split the chop down the middle, but don't completely separate the halves. Then open the meat like a book (or a butterfly, hence the term) and place it in the skillet. Of course, this is easier to do with boneless as opposed to bone-in chops. This trick will easily knock a couple of minutes off your cooking time, though the fact that the cuts are thinner makes them easier to burn.

Grilling is a close second, or possibly a tie, to pan-frying because pork chops usually require about 4 to 6 minutes per side, on average. Baked or roasted pork chops are often a two-step process; many recipes with these methods start out with a few minutes in a skillet and wind up with about 15 minutes or so in the oven.

In all honesty, microwaving pork chops is probably every bit as quick as pan-frying -- in fact, it's may even be faster -- but it certainly doesn't sound as appetizing. Pan-frying is a bit more labor-intensive, but trust us, it's worth the effort.

No matter how you choose to prepare your chops, be sure that each one is cooked appropriately. Food poisoning isn't pretty, so investing in a meat thermometer is a good idea. If you cook meat frequently, consider purchasing a digital thermometer, which can be programmed to alert you when the cut reaches a pre-set temperature. An internal temperature of at least 145 degrees Fahrenheit (62.7 Celsius) is recommended to ensure that the pork is safe for consumption.

Ultimate Guide to Black Angus Steak
How long do you cook shrimp on the grill?
5 Easy One-pan Dinners