Everything You Ever Wanted to Know About Fast Food 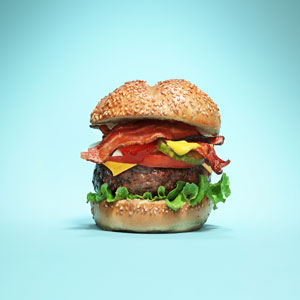 Ah, the classic American hamburger. What are the nuts and bolts of fast food culture? Check out these fast food pictures.
Chris Stein/Getty Images

White Castle — the first fast food restaurant — opened in 1921 in Wichita, Kansas. Before White Castle, hamburgers were generally considered to be low-grade, suspicious food sold out of street carts and at fairs. White Castle changed public opinion by allowing patrons to see the food being prepared, making it the first restaurant chain to tap into Americans' growing concerns about restaurant sanitation and hygiene [source: Smith]. White Castle's success paved the way for the hamburger to become a quintessential American food, and it also ushered in an era of other fast food restaurants and chains.

Fast food didn't hit really hit its stride, however, until McDonald's came on the scene. The first McDonald's restaurant was actually a barbecue joint. Two brothers with the now-famous surname opened it in 1940 in San Bernardino, Calif. Inspired by the automobile industry, the McDonald brothers completely revamped their business model in 1948 and streamlined their menu to just a few options: hamburgers, cheeseburgers, french fries, milkshakes and soda. They produced their food in an assembly-line process, which is now standard in the fast food industry.

As competition in the fast food industry grew in the 1960s, so did the menus. Fast food restaurants could no longer survive with the simple options that McDonald's, White Castle and others had long offered, so menus were expanded to attract a variety of customers and keep them coming back for more. By the 1980s, most fast food operations had chicken and fish on the menu as well as more expensive, premium sandwiches, such as Burger King's Whopper [source: Smith]. By adding some breakfast options, fast food chains tapped into a new market: commuters.

Fast food remains so popular because it's cheap, filling and quick. As of 2001, approximately 25 percent of the U.S. population eats fast food every day, and the average American consumes an average of three hamburgers and four orders of french fries every week [sources: CBS, PBS]. The rate of consumption has only increased since then [source: Smith].

Of course, most of us realize that fast food isn't good for us. Loaded with calories, trans and saturated fats, high levels of sodium and sometimes close to no nutritional value at all, fast food is often blamed for our skyrocketing obesity rate and the health problems associated with being overweight.

However, as we've become more educated about the dangers of fast food, healthy alternatives have begun to appear. Subway restaurants, for example, have achieved great success by advertising their sandwiches as healthy alternatives to the fatty burgers and french fries found in most fast food establishments. In fact, many fast food chains, such as McDonald's and Wendy's, have diversified their menus to include healthier options, such as fruit and salad, which you can substitute for fries.

Although McDonald's retains the name of brothers who created it, Ray Kroc is known as the founder of McDonald's. Kroc actually bought out the brothers and founded McDonald's Corp., the company responsible for bringing Mickey D's to the majority of Americans and the rest of the world.

Everything You Ever Wanted to Know About Cafeterias
Ultimate Guide to Fruitcake
Eat Frozen, Live Frugally