10 Most Popular Cupcake Flavors -- and Why

Browse the article 10 Most Popular Cupcake Flavors -- and Why 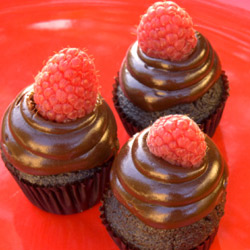 Your tastes have gotten more sophisticated over the years -- and so have the flavors of your favorite bakery treat. See more pictures of cupcakes and cakes.
Liza McCorkle/Getty Images

It's pretty safe to assume that if you're reading this article, you're a fan of cupcakes -- and it's a good time to be one. In recent years, these versatile, tasty treats have gone from being inexpensive, easy-to-make confections given away at children's parties to trendy desserts enjoyed by hipsters around the world.

Today, little cupcakes are a big deal. While many restaurants and eateries have been forced to shut their doors due to the recent economic downturn, business in specialty cupcake shops is booming [source: Tulsa World]. The reason for cupcakes' recent surge in popularity is simple: They're relatively inexpensive and grant people a few bites of indulgence, even when money is tight.

Click over to the next page to learn why vanilla cupcakes are anything but bland.

Despite how tame you may think vanilla is, the flavor has exotic origins. Vanilla comes from plants that grow in tropical areas, and harvesting the prized vanilla bean is no easy feat. After a long and complicated process, the end result is the immensely popular vanilla extract.

Chances are you've had a vanilla cupcake at one time or another. As you probably already know, vanilla is one of the most common flavors found in candies, pastries and various sweet treats. In fact, like chocolate, the taste of vanilla typifies sweet desserts and confections for many of us, so it's not surprising that these cupcakes are so popular and easy to find.

Vanilla cupcakes usually consist of a sweet white or yellow cake with a thick layer of creamy white frosting. They line the shelves of local bakeries and grocery stores and will almost certainly appear on the menu of any specialty cupcake shop you visit -- you can even pick one up at Starbucks. Some say the cupcake is a fleeting trend, but regardless, the vanilla flavor is here to stay. 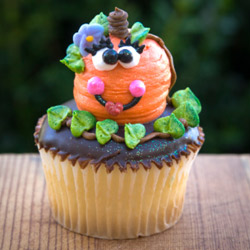 If the rich, spicy taste of pumpkin cupcakes doesn't appeal to you, how about a classic vanilla-chocolate cupcake garnished with a candy pumpkin?
Liza McCorkle/Getty Images

Indigenous North Americans have been growing pumpkins for approximately 5,000 years [source: History Channel]. But how long have they been eating pumpkin cupcakes?

Pumpkin-flavored foods are extremely popular during the fall and winter months. The pleasant taste of these large orange fruits appears in everything from pie to beer, so it should come as no surprise that pumpkin cupcakes are all the rage leading up to Halloween and throughout the holidays. Although they're typically available for just a few months out of the year, pumpkin cupcakes are extremely popular. It's not unusual to find them at parties, grocery stores, bakeries or even on restaurant dessert menus.

When sitting down to devour one of these tasty treats, you can count on a pumpkin cake base, but the choice of topping is up to the baker. You might find a traditional, sugary icing that may or may not taste of pumpkin, or the cake might simply be glazed. Cream cheese is a very popular and common topping. By the time Christmas dinner comes around, if everyone's tired of pumpkin pie, pick up a dozen pumpkin cupcakes and serve them for dessert, instead.

There's something comforting and nostalgic about a steaming loaf of banana bread. Banana cupcakes taste a lot like banana bread -- only you probably won't be eating one for breakfast. These surprisingly popular desserts are more common than you might think, and like their pumpkin-flavored cousins, they go well with a variety of toppings and icings.

Anyone who has tried a banana split knows how versatile these mushy yellow fruits can be, so when they're the star flavor in a cupcake, the possibilities are nearly endless. Banana frosting is always a good choice, as is strawberry, raspberry or any other berry-flavored icing. Of course, just about any type of chocolate frosting is delicious when topping these little yellow cakes, but if you're in the mood for something really different, try adding a dollop of whipped cream. It's simple and delicious! 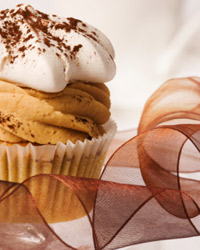 Coffee just seems to go with cups -- even cupcakes. This grown-up treat is frosted like a cup of cappuccino.
Martin Harvey/Getty Images

Coffee-flavored cupcakes may sound bizarre to some people, but they make perfect sense when you think about it. After all, there's coffee cake (though typically sans icing), ice cream, candy -- even tiramisu contains a distinctive coffee taste. Coffee made the jump from a pick-me-up drink in the morning to a popular dessert staple a long time ago, so don't be surprised if you see coffee cupcakes sharing shelf space with their chocolate and vanilla counterparts at your local supermarket or bakery.

Coffee is featured prominently in desserts because it goes well with just about anything that tastes sweet. Therefore, there are a myriad of possible frosting options for coffee cupcakes. Chocolate, vanilla, butterscotch, almond, raspberry -- really, any flavor that might go with a cup of joe is a possible contender for the cake or icing part of your cupcake. Even if you take your cup decaf, you have nothing to fear; decaffeinated grounds can easily be substituted into any coffee cupcake recipe.

Let's face it, just about everyone loves chocolate. And no wonder -- many of the compounds contained in chocolate cause receptors in the brain to chemically induce feelings of pleasure (Read more about this in Can chocolate give me a happy high?). Chocolate is eaten by people all over the world, and for many of us, dessert and sweet treats are synonymous with the flavor. 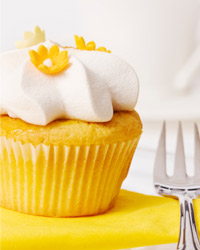 Luscious lemon cupcakes are a sunny treat with just a hint of tartness.
Martin Harvey/Getty Images

Biting into a lemon cupcake isn't anything like sinking your teeth into an actual lemon. Although there will be a definite bit of tartness with the cupcake -- the amount of which is determined by the recipe -- the overriding sensation should be sweet. In fact, that's what makes this variety so popular. People who like a little sour with their sweet have found an answer to their dessert dilemma after years of passing up chocolate and red velvet cupcakes. Lemon cupcakes have really gained popularity in recent years, and you'd be hard-pressed to walk into a specialty cupcake store and not find one.

Lemon cupcakes typically consist of a yellow, lemon-flavored cake with sweet but slightly tangy yellow frosting. If the combination of lemon cake and lemon frosting is too tart for your taste, ask for an unfrosted cupcake with just a light dusting of powdered sugar for a subtle dose of extra sweetness.

When you think of peanut butter, cupcakes probably aren't the first thing that comes to your mind. However, peanut butter cupcakes have become quite popular in recent years, and, like many of the other cakes featured in this article, they aren't too sweet, which makes them extremely versatile and likeable.

Since you're starting with a nutty, slightly savory cake, you could just build on that by topping it with peanut butter frosting. To take the decadence up a notch, add chocolate. If you feel like going for something more unique, try mixing up some banana or honey frosting for an unusual treat. Or, if you're just looking to sweeten up an old childhood favorite, try forgoing frosting altogether and simply adding a few dollops of grape jelly to the top of the cupcake -- it's like a bagged lunch and trendy dessert in one! 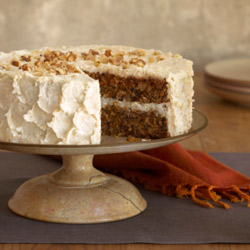 Carrots have been a principal ingredient in European sweet cakes since the Middle Ages. The reason for this is simple: Carrots have more sugar than just about any other vegetable [source: Davidson]. Even if you have an aversion to carrots, you'll probably still like carrot cake cupcakes. They're like regular carrot cakes, only smaller. These sweet orange and white treats consist of a miniature carrot cake with a cream cheese-based frosting. If you're out of frosting (or don't like cream cheese), you can also eat them plain.

Carrot cake cupcakes epitomize the reason cupcakes have become so chic recently, as they offer a taste of indulgence without the temptation of an entire cake. You can find carrot cake cupcakes in most cupcake specialty stores and in many bakeries and supermarkets.

Like carrot cake cupcakes, red velvet cupcakes are big treats in miniature form. Instead of ordering an entire red velvet cake, why not choose a portion-controlled red velvet cupcake, which you can eat in about five or six big bites? This variety is moderately decadent and easier on both the wallet and the waistline than a full-sized cake, a fact that has helped red velvet cupcakes become virtually synonymous with the modern cupcake movement. It's a trendy, grown-up flavor in a kid-sized form that appeals to sweet-lovers of all ages. In fact, red velvet cupcakes often outsell all other flavors, including such traditional favorites as chocolate and vanilla, in some specialty cupcake stores [source: cupcake].

Aside from size, red velvet cupcakes don't really differ from their full-scale brethren. The little red cakes are smaller, but otherwise identical, to full-scale red velvet cakes, and they are topped with the same cream cheese-based frosting. 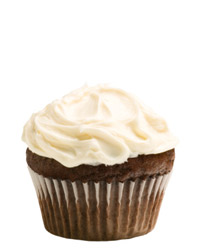 Chocolate and vanilla cupcakes might only consist of two flavors, but they've got countless variations. A light vanilla cake with dark chocolate frosting provides an entirely different taste from a milk chocolate cake slathered with creamy vanilla icing.

You can't go wrong with these two classic flavors, regardless if you're mixing up a batch straight out of a box or are about to devour a carefully concocted treat made from the finest ingredients. 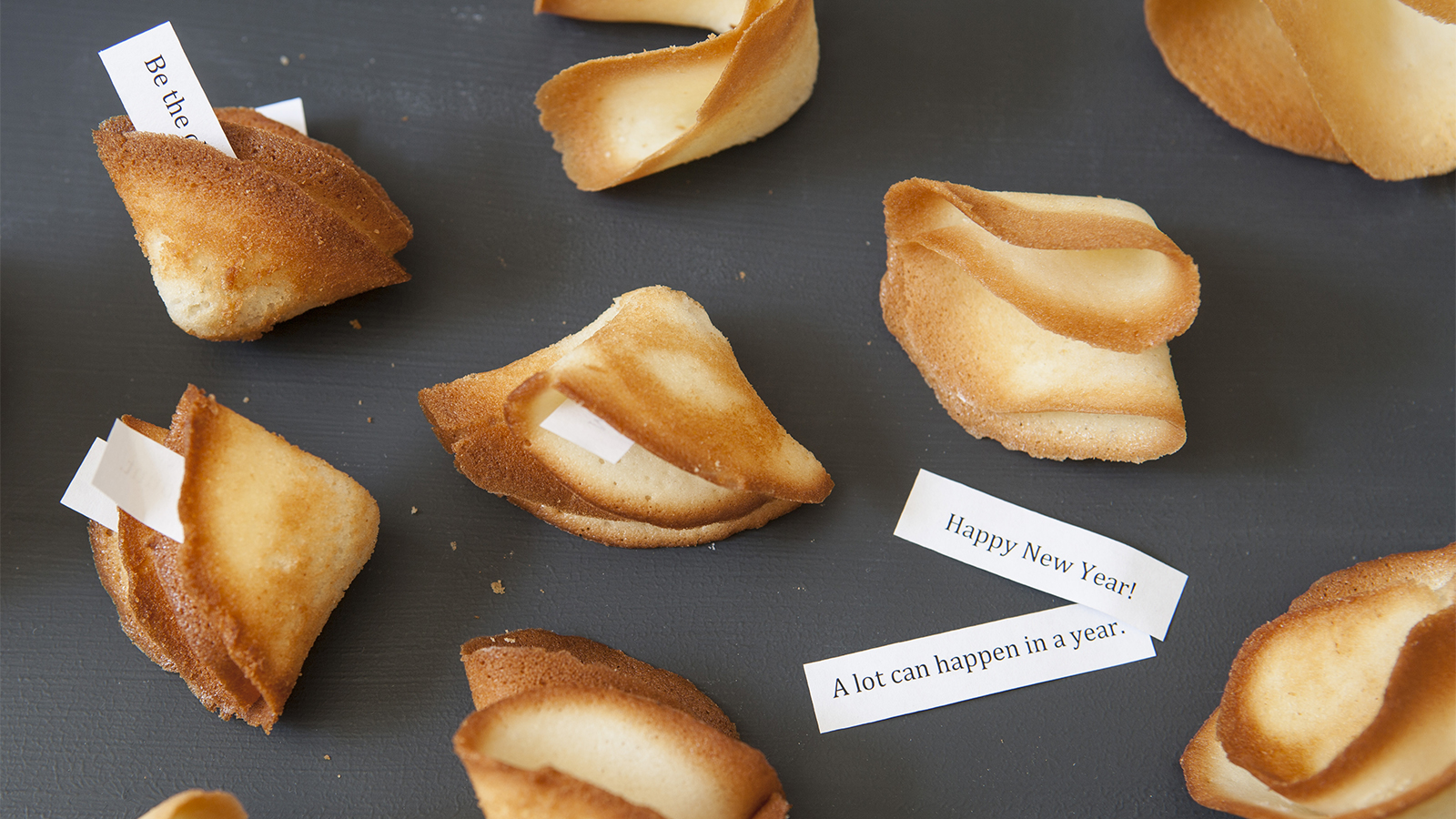